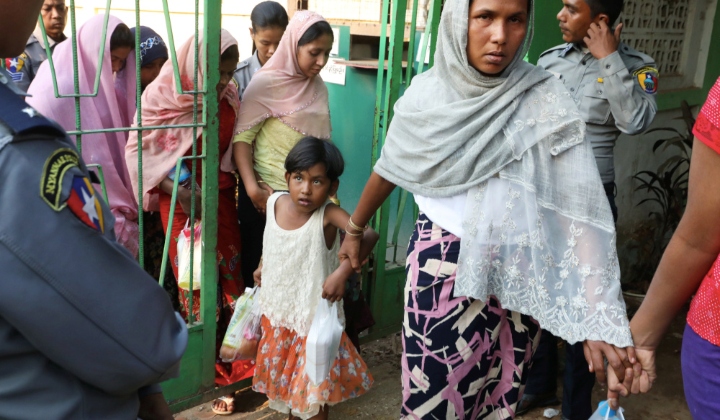 There were 178,980 refugees and asylum-seekers registered with United Nations High Commissioner for Refugees (UNHCR) by the end of February 2020.

These refugees are not among those specified to receive assistance under the Prihatin Rakyat Economic Stimulus Package. They rely on their daily wages which are now uncertain due to Covid-19 pandemic and ensuing movement control order (MCO).

They are suffering to get basic food supply and are almost cut off from getting sources of income to continue their livelihoods. Many of them live in crowded settlements with no ability to social distance or isolate those who get sick, which makes them especially vulnerable to the virus.

In addition to this, there have been viral claims that busloads of them attended the Sri Petaling tabligh event and that these attendees are not coming forward to be tested for fear of being arrested.

However, the truth is far from what has been claimed.

Facebook user Jules Rahman Ong shared online how he had the opportunity to follow the Rohingya community leader in Selayang, Ustaz Rafik Ismail, for a day.

Jules told of how the Ustaz took 21 Rohingyaâ€™s for their second round of Covid-19 tests. They are among those who had attended the tabligh event at Sri Petaling mosque. Around 95 of them had already been tested two weeks before.

Despite rumours that over 2,000 of them had gone for the event, Ustaz Rafik clarified that not many refugees have the luxury to take several days off work for such a thing.

They may be in the hundreds from other places as well, but not that many refugees have the “luxury” to spend a few days there without working. And they were not reluctant, as soon as there was assurance they will not be arrested.

According to Jules, Ustaz Rafik told him that one person in the community had tested positive, so now everyone who had contact with that individual had to be retested. Speaking to one of the tabligh attendees in the community, Jules was told that they didnâ€™t know about the virus when they went for the event.

It wasnâ€™t announced at the mosque and they were only informed once they returned.

At the testing centre, held in the multipurpose hall, Dewan Komuniti Batu Muda, Selayang, Jules reported that the testing process was very organised and both foreigners and locals were treated exactly the same by health officials.

Each person is separated by at least 1.5m and each take turns to fill up a document before the swab. The healthcare workers wore protective plastic suits.

He also shared that RELA officers were seen maintaining order and made sure everyone followed the standard operating procedure (SOP). Meanwhile, refugees who could read and write helped those who couldn’t.

According to a UNHCR spokesman, their hotlines have been receiving between 50 and 70 calls a day.

Nearly half the calls are related to Covid-19, such as where and how to get screened, what the cost is, and other questions on the disease which are answered by trained staff members.

No matter how long we social distance or how many times we wash our hands in a day, Malaysia canâ€™t effectively combat Covid-19 if migrants, stateless people, and refugees are unable to get healthcare due to lack of funds, discrimination, or fear of arrest and deportation.

The Ministry of Healthâ€™s move to provide free tests for all Malaysians and foreigners is a commendable and necessary step.

This pandemic exposes our neglect of certain groups in society and make it glaring our lack of care and compassion for marginalised groups. This is the time to make amends.

Of the 178,980 refugees and asylum-seekers registered with UNHCR, a total of 154,080 are from Myanmar, while 24,900 are from Pakistan, Yemen, Somalia Syria, Afghanistan, Sri Lanka, Iraq and Palestine.

PPIM Lodged Police Report Against MOH For Not Using Ivermectin

“Once A Positive Example, Now Among The Worst” Says Nat Geo On M’sia’s Fight With Covid-19