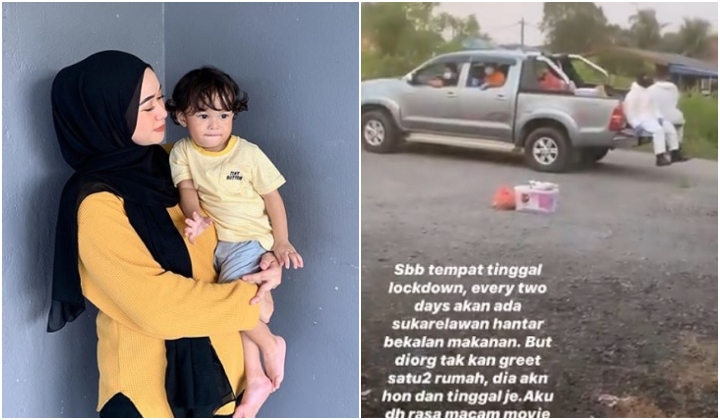 As the number of Covid-19 cases continue to climb in Malaysia, the Health Ministry has identified several red zones across the nation.

Inside these red zones, certain locations have been put under Enhanced Movement Control Order (EMCO) when a sudden spread of the coronavirus is detected. Under the EMCO, all business activities are halted and no one is allowed to leave their homes, so it’s essentially a lockdown.

If you’ve ever wondered what life is like inside a Covid-19 red zone under lockdown, wonder no more.

Intan Nurdiyana, a makeup artist living in Simpang Renggam, Johor has taken to Twitter to show a glimpse of her life under EMCO, describing it similar to the dystopian fantasy adventure film The Hunger Games.

Sharing a video of welfare workers suited up in personal protective equipment (PPE), she explained that food will be sent to each home every two days, but the workers won’t come up to the house and greet you. Instead, the food supplies will be placed in front of the house. Then they’ll honk and leave.

It feels like The Hunger Games with different districts, each time they send over food supplies to lockdown areas.

The Hunger Games is a young adult dystopian novel series turned into films that depict a post-apocalyptic North America divided into â€œdistrictsâ€ with varying levels of poverty.

Another Twitter user @fyrasharifudin, also under lockdown, shared a clip of welfare workers dropping off food to his home.

They will usually put the food in front of your house and leave quickly. They won’t allow us to go out and approach them.

If that’s not dystopian enough, Intan’s 3-year-old son was recently taken away by ambulance for Covid-19 testing after the young child showed symptoms.

She told local news channel TV9 that she was truly frightened when the ambulance came to pick up her son. She wasn’t sure when she would be able to see her son again as Covid-19 patients were kept in isolation.

Thankfully, the results came back negative and the entire family is reunited. They’re currently doing their part in fighting the pandemic by staying at home and adhering to the EMCO.