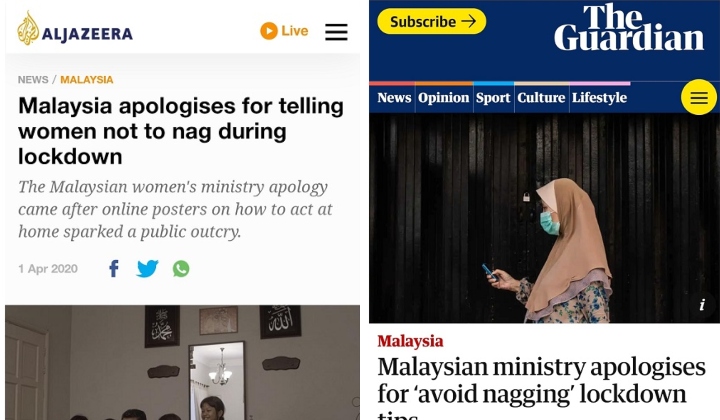 Screenshot from Al-Jazeera & The Guardian

After the Women, Family and Community Development Ministry’s perplexing Movement Control Order (MCO) tips for women to wear makeup at home, and to talk in a Doraemon-like voice instead of nagging at their husbands were released on their social media channels, it immediately drew backlash from horrified Malaysians.

Many were outraged at the advice that were deemed “sexist and misogynistic” and the ministry quickly deleted the posters and issued an “apology“.

Naturally, it was quite the issue among Malaysians but it looks like the cat’s out of the bag as the ill-advised advice has grabbed headlines around the world.

The UK news site ran the news saying there was “anger and disbelief” over the posts with a caption that “urged women to avoid nagging their husbands” and to “imitate the squeaky voice of Doraemon.”

The Daily Show with Trevor Noah -US

The popular US talk show mentioned the issue on their 1st April show where the host Trevor Noah had some very choice words.

The Qatari-based news organisation picked up the embarrassing news in an article that also highlighted Malaysia’s poor ranking on the latest World Economic Forum Global Gender Gap index. Malaysia ranks No 104 out of 153.

The Australian news site pointed out that the posters were strongly criticised on social media and by women’s advocacy groups. It also mentioned Malaysia’s poor scores on political empowerment and economic participation on the Global Gender Gap Index.

Taiwan’s English-language news carried the news on the ministry’s apology and the subsequent backlash. It also mentioned how the government helpline for the vulnerable and domestic violence victims had seen a surge in calls since the MCO was implemented.

The UK’s digital news site reported the incident while stating “the ministry also appeared to refer to the lockdown as a holiday.”

The Saudi-run news site mentioned that the women’s ministry issued guidelines for avoiding domestic conflict during lockdown, but rights groups fear domestic violence may be on the rise during the lockdown period.

[JUST IN] Full Lockdown From June 1 Till June 14, Says PMO

Be Serious In Fighting Covid-19 Or A Lot More People Will Die, Dr M Warns Gov’t