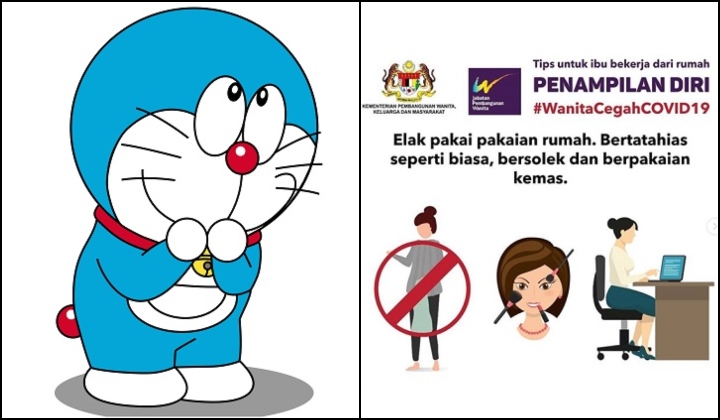 Staying put indoors during the Movement Control Order (MCO) isn’t easy, especially when youâ€™re cooped up with family members for hours on end.

If youâ€™re a working mother who feels like you need some help from your spouse, instead of nagging, why donâ€™t you ask him nicely in a Doraemon voice, followed by a giggle?

Odd as this advice might be, it was released by the Women, Family and Community Development Ministry in a series of posters bearing MCO tips.

It didn’t stop there though.

Another poster for mothers working from home recommended that they should avoid wearing house clothes and put on make-up.

The bizarreness of these public service announcements did not go unnoticed and it drew criticisms from various parties, especially womenâ€™s rights groups.

Many were irked by the absurd advice, pointing out that the ministry should focus on more pressing issues.

The Asean Post notes that the virus lock down has caused a spike in domestic violence across Asia.

In fact, since the MCO began, the ministry’s Talian Kasih hotline for women and children who are experiencing abuse and mental health problems has seen a 57% increase in calls from women in distress.

Following the backlash, the “Doraemon voice” posters were removed from the ministry’s social media channels though the make-up one remains online.

3,800 Free Online Courses Available For Unemployed Malaysians On Coursera Until End Of 2020