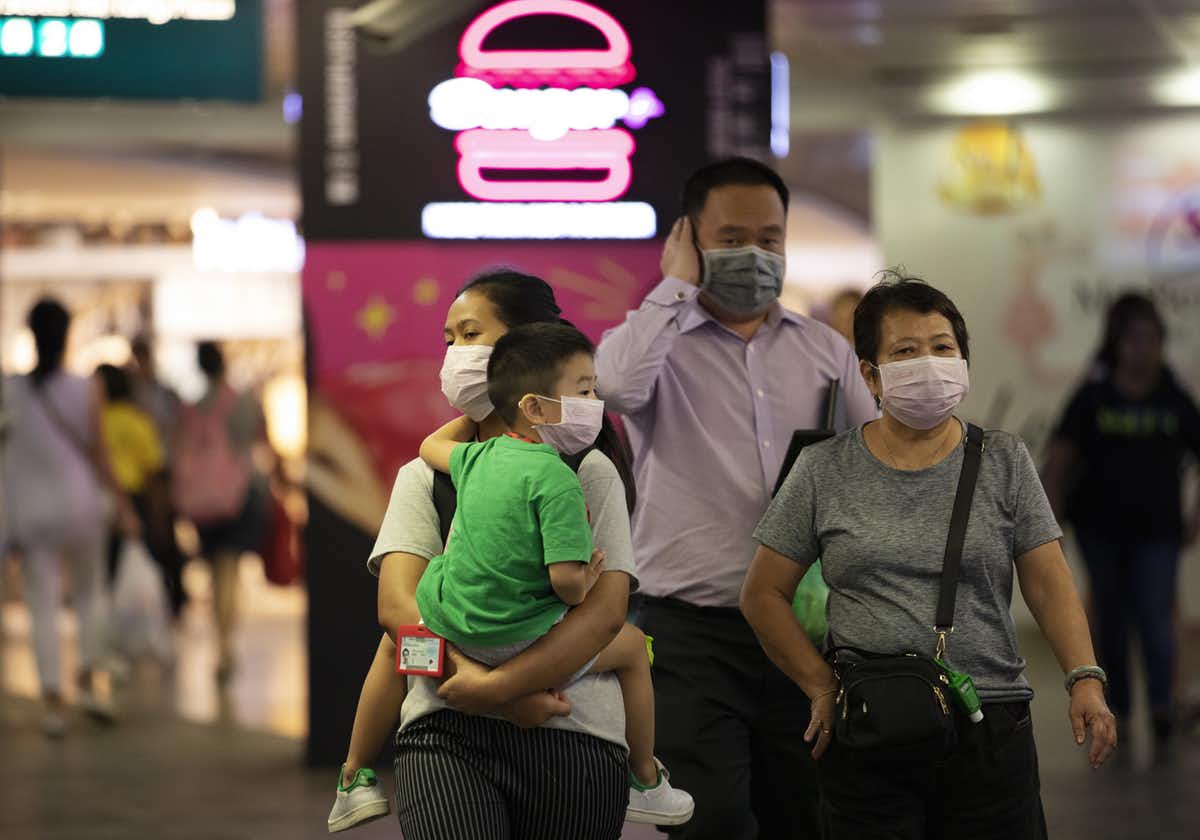 Singapore’s response to the coronavirus has been held up by many around the world as a model. As of this week, the country has had 455 total cases (with two deaths), and its infection rate is much slower than the rest of the world.

The first thing that helped with its response was the country was ready before the outbreak even occurred because of the SARS outbreak of 2002-03.

Singapore was aware then that its infrastructure wasn’t ready for an outbreak of this kind. So, in the years since, isolation hospitals were built, more negative pressure rooms were created and legislation was put in place.

Then, on December 31, when the world first became aware of coronavirus in China, Singapore started to get prepared. By the time the World Health Organisation declared a public health emergency at the end of January, the Lion City was ready.

In February, Singapore made it clear again this virus had the potential to have major health, social and economic consequences. They knew that because of what they saw had happened in China. The virus brought a country of 1.4 billion people to its knees.

The rest of Asia was clearly frightened and scampering to get ready, too – Taiwan, Hong Kong, South Korea. There was no confusion in the minds of these countries what this virus could do.

Yet, still other parts of the world weren’t preparing.

China also didn’t do that. Wuhan created 50,000 hospital beds in two big temporary hospitals. These weren’t hospitals for sick people, these were all the mild cases that Australia, Europe and US sent home.

In Singapore, the view was that it’s better to hive those people off and look after them elsewhere until the virus is clear. People with mild cases are kept in hospitals – they have enough space to put all the positives together.

If you’re going to look after people at home, how do you know they are complying with self-isolation rules? Are you doing phone tracking? Are you doing random checks regularly enough? Are there harsh enough penalties to frighten people from disobeying?

Singapore has contact tracing teams, who identify all the contacts of an infected person and ring them up. Often these people have early symptoms and it will be arranged for them to be picked up and tested.

Singapore is very liberal with testing. Less than 1% of tests are positive, so that reflects just how many tests they are doing.

If people don’t have symptoms, they’re put in home quarantine. And home quarantine is very strict. A couple times a day, you’ll get an SMS and you have to click on a link that will show where your phone is.

In case you cheat and leave your phone at home with someone else, the government has people knocking on doors now and then. The penalties are pretty harsh.

The approach Malaysia has taken thus far has been shocking as there has been little to no enforcement or accountability. There has been no strict penalties or enforcement for those failing to adhere to self quarantine.

Are there penalties in place in Malaysia for failure to self quarantine?

The federal government derives its authority for isolation and quarantine from the Prevention and Control of Infectious Diseases Act 1988.

Any person (first offenders) who obstructs or disobeys such executions commits an offence and is liable upon conviction to imprisonment for a term not exceeding two years, a fine or both.

There is a law in place in Malaysia however as at time of writing no one has been charged.

There has been no action taken on a woman who lied about her travel history and caused an entire hospital in Alor Setar to close down.

Similarly no action has been taken on the 12 tabligh members who attempted to re-enter Malaysia via Sabah. They are however being held in quarantine at the Tawau Teachers Institute campus.

The super spreader Patient 136 failed to self quarantine

It is unknown how Patient 136 who had returned from South Korea, a Covid-19 hotspot, to Malaysia on February 22 managed to attend the February 27 tabligh event, as Malaysians are supposed to self-quarantine for 14 days upon return from disease outbreak countries. If stricter quarantine was practised, there would be less Covid-19 cases in Malaysia.

How self quarantine is enforced in Singapore

Those under quarantine will be isolated from others, and should monitor their temperatures and report their health status to their quarantine order agent at least three times a day.

For those serving out orders at home, spot checks will be carried out by officers. If found to be non-compliant, they may be required to wear an electronic tag or be detained and isolated in a hospital.

The penalty for non-compliance in Singapore is harsh

As it is a legal order issued under the Infectious Diseases Act, anyone flouting a quarantine for the first time may be fined up to $10,000, jailed for up to six months, or both, with higher penalties for subsequent breaches.

There is evidence of strict enforcement on this. Two Chinese nationals have already been charged under the Act for giving police false information about their whereabouts during contact tracing.

Similarly a total of 19 work pass holders and employers were punished for flouting the Ministry of Manpower’s Leave of Absence (LOA) requirements in place for the COVID-19 outbreak.

On top of having their work passes revoked, the workers were also permanently banned from employment in Singapore. The employer’s work pass privileges were suspended for two years as well.

Singapore has been very strong on community engagement. The messages they send are: if you are sick, stay home. If you are sick and have had contact with a COVID-19 patient, go in for a test. If you can’t stay home and you have to go out, wear a mask. If you cough, cough into your elbow. Avoid crowds, particularly indoors.

As for everyone else, they are required to practice social distancing. For restaurant and bar owners, they are encouraged to try and reduce the number of people in their businesses. People know what to do and they know if there’s a lockdown, they’re going to be closed. There’s a lot of business and revenue to be lost.

Everyone understands and adapts. They know what happens when people don’t adapt – The Government will end up closing things down.

The messaging has also been very strategic. There’s a cross-ministerial task force – we regard this as a whole of government issue, not just a health issue. The Singaporean prime minister comes on television every couple weeks, the chair of the task force is now a well-known face. Messaging is generally limited to a small number of authoritative people

The messaging from the government is also consistent – they provide the latest numbers and say what’s happening in other countries and what might need to be done in Singapore.

Singapore has also created a public awareness campaign with cartoons. This is an alternative medium people might connect with. They are very popular, with over 1 million viewings online. The World Health Organisation is now translating them into other languages.

Malaysia’s response has been mixed

Communication from the Government has been largely mixed with most information being communicated by mainstream media and via MKN’s telegram and twitter. This begs the question however, what if I do not have Twitter or Telegram?

Contrasting Malaysia’s response to Singapore’s communication plan, there is definitely room for improvement.

Why Singapore isn’t in lockdown? Liberal testing for the virus

It’s pretty well-known that children are asymptomatic or only have mild disease, so there was no real reason to close schools. If you close schools, what’s the trigger to reopen them?

In Singapore, they want life to go on as normal. They want businesses, churches, restaurants and schools to stay open. This is what success looks like. Everything goes forward with modifications as needed, and you keep doing this until there’s a vaccine or a treatment.

On testing, the threshold for getting a test is pretty low. For the first week, Singapore tested only people from Wuhan or Hubei province, then they tested anyone who had been in China within the last 14 days.

By the end of January, all of the Lion City’s public hospitals could do tests. Then they moved to enhanced screening – they tested anyone coming to a hospital with a respiratory illness, anyone who had been in contact with a COVID-19 patient.

Now, it’s even more liberal. If you’re a hospital staff member with a mild cold, you will be given a test.

But if you’re a normal person with no contacts with anybody and mild symptoms, you’ll just be sent home. You can get a medical certificate that allows you to stay home from work for five days. If you are a casual worker, there’s financial help with that, too.

Getting yourself screened for Covid-19 isn’t something that can be done at any healthcare provider. Currently, the Ministry of Health has 59 designated hospitals across Malaysia for Covid-19 screening, with 26 hospitals that will admit you if you are fall within certain criteria.

Here’s where things get a little confusing. Before you’re classified as a “case”, which basically means that you’re infected, you’ll first be classified as either a sporadic case, PUI (Patient Under Investigation), or a contact.

Contacts would include those that have had close contact with an infected individual or being an individual who is displaying symptoms and has recently been to impacted countries.

Only those that are classified as the above will be screened for the Covid-19 infection. It’s also worth noting that contact with an infected individual only refers to close contact — this is because transmission of the disease is via droplets, as opposed to the coronavirus being airborne. Once a patient is screened, he is then put into quarantine: Self-quarantine if asymptomatic, hospital quarantine if symptoms are present.

This is the official list of designated hospitals by the Health Ministry for Covid-19 screening and admission.

There have been some positive developments to address these short comings. It was announced that the Malaysian Government would increase its testing capability from 3,500 to 16,000 cases a day.

Leadership needs to be organised

It’s nothing really fancy. Singapore doesn’t have the magic answer here, they just do it well and efficiently.

It’s certainly more challenging to put these things in place in bigger countries with different political systems, but it just means people need to know their roles.

For instance, communicating to the nation should come from the federal government, but the state level should talk about state-relevant things.

It’s really about leadership being organised enough to get the messaging right as a team. Then people will feel more comfortable and are much more likely to follow the rules.

This article is republished from The Conversation under a Creative Commons license. It has been edited for clarity and to provide a comparison to Malaysia’s response. Read the original article.