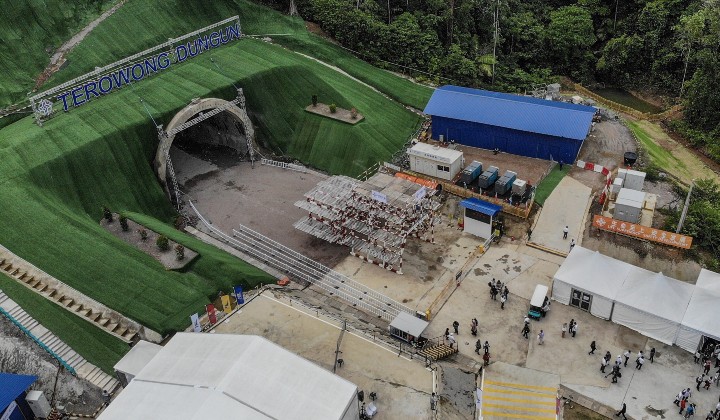 A trip from Selangor to Kelantan is usually a time-consuming affair that can take up half a day as you have to navigate through a few states just to cross from the West Coast to the East Coast.

There are alternatives to get to Kota Bharu, such as buses or taking a flight but in the future, there’s another mode of transport that you can use to get to the East Coast and that’s via the East Coast Rail Link (ECRL) line.

ECRL’s 640km track line will link the states of Kelantan, Terengganu, and Pahang to Negeri Sembilan, Selangor and the Federal Territory of Putrajaya and the trains can reach speeds of up 160km/h.

If you board the train from Putrajaya Sentral, you should arrive in Kota Bharu in the span of around 4 hours.

Besides connecting the two coasts and benefitting states where the tracks are being built, the mega project would also benefit multiple sectors including tourism, and oil and gas.

But what is the ECRL and why does Malaysia need a coast-to-coast rail line?

From coast to coast

ECRL was announced by then-Prime Minister, Datuk Seri Najib Razak during the Eleventh Malaysian Plan with an estimated cost of RM55 billion. The original line was supposed to be around 688 kilometers from end to end and was initially expected to be completed by 2024.

As part of an agreement made with the government of China the construction work will be conducted by China Communications Construction Company (CCCC) while Malaysia Rail Link (MRL) will be the project owner.

Najib said the project was long overdue as connectivity issues between the east coast states and the west coast due to the network of roads, highways and small rail lines being woefully inadequate.

It’s estimated that 5.4 million passengers and 53 million tonnes of cargo will use the service annually by 2030, as the primary transport mode between the east coast and west coast.

The project is also said to employ at least 30% of Malaysian contractors and the railway is expected to increase the gross domestic product of the east coast states by 1.5%.

One of the controversies surrounding the railway project has to do with the cost and also suspicions of how the finances were managed due to other dubious mega projects and donations coming from incredulous sources.

During the time there was also the rhetoric thrown by the opposition about Malaysia being sold to China.

Even with the change of government in Putrajaya, there was still controversy but it related to the newly-discovered coronavirus rather than the misappropriation of funds.

As a preventive measure, some 200 ECRL construction workers who went back during Chinese New Year were asked to self-quarantine themselves in their home country until the situation improved and MRL chief executive officer, Datuk Seri Darwis Abdul Razak said their absence wouldn’t affect the construction progress.

There was also the profit-sharing issue as some alleged that Malaysia would lose assets and minerals as CCCC can claim the resources.

MRL quashed the claims by reiterating that the Malaysian Government is not required to provide any revenue or profit guarantee for the JV and losses incurred would be split 50:50 between MRL and CCCC.

But if the operations are profitable, 80% of the profits would go to MRL and 20% will go to CCCC.

The project was relaunched in 2019 after months of negotiations between China and Malaysia’s government after the costs were reduced significantly.

Civil works are expected to make up almost 60% of the RM44b construction costs.

Besides reducing the costs, a major revision was also made on the original alignment, which will see reroutes to Negeri Sembilan and the journey from Port Klang will now go to Jelebu (Negeri Sembilan) first before linking up to Mentakab (Pahang).

By avoiding an 18km tunnel across the Titiwangsa Range, the government saved approximately RM10 billion.

What do analysts think?

Analysts over at Malaysian Industrial Development Finance Berhad (MIDF) think industries such as the casting of metals, fiber optic cables, electronic & other electric, and petroleum will benefit from the rail line.

Not only that, but other sectors including wholesale and retail trade, and real estate would also be boosted by the new rail as analysts expect an increase in new township areas and better town-development in existing areas along the railway.

They’ve also added that three states of Kelantan, Pahang, and Terengganu are likely to reap most of the economic benefits of ECRL.

With ECRL, we believe it will generate more economic activities in other sectors hence shifting to a less government-reliant economy, in line with Tun Mahathirâ€™s idea to downsize the public sector over a period of time through industrialisation amid increasing burden towards the nationâ€™s financial health.

The project is expected to reduce government operating expenditure especially on the emoluments which account for the largest share of total expenditure at 30%.

Another potential income generator is the 30% allocation for passengers which could create demand for travel as, with traveling hours and costs are reduced, individuals could afford to take the train for a shopping trip that they never would have considered which MIDF mentioned is like the impact seen from the introduction of the Electric Train Service (ETS) from Gemas to Padang Besar.