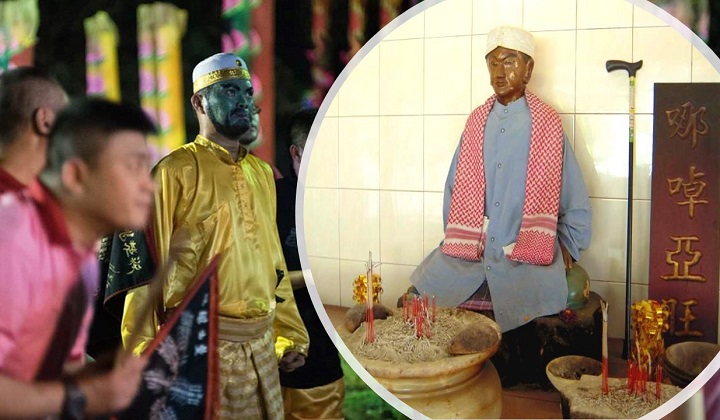 Have you ever spotted Chinese altars peppered throughout Malaysia, be it in the city, countryside or even somewhere in the jungle?

If you peek inside, sometimes you see inscriptions bearing Chinese characters and at other times, you’d be greeted by the surprising sight of a Malay man!

This unusual Malay deity worshipped by the Chinese in Malaysia is called Datuk Kong, Datuk Gong or Datuk Keramat.

The general asumption of Datuk Kong worship is that it’s a Chinese belief. However, that’s not entirely true.

The Datuk Kong worship is rooted in the ancient keramat worship by the Malay community that declined only in recent times with the rise of Islamic values in Malaysian culture.

Keramat refers to sacred places and persons, nature-worship and ancestor-worship of the Malay community. The term “keramat” in Malay is derived from the Arabic term “karamah” which refers specifically to the wali, a close friend of God, or a pious person.

British scholar R.O Winstetd recorded his research on the keramat worship of colonial Malaya in the December 1924 edition of the Journal of the Malayan Branch of the Royal Asiatic Society. In his writings, he broke down the keramat into 6 categories:

The origin of these sites and persons considered as keramat lies in the ancient belief in the spirit and soul. Deceased Malay datuks are believed to manifest themselves in the form of invisible spirits whose duty is to ensure the general well-being of the residents who worship them.

While the origin stories of these keramats may be different, the essence remains the same. A place, stone, animal, tree or grave becomes a keramat if it’s linked to a miraculous event that’s usually accompanied by a dream.

One well known example is the keramat that led to the naming of Kampung Datuk Keramat in Kuala Lumpur.

Prior to the 1920s, this village in Ampang was called Kampung Tangga China – named after a stone staircase which led to the resting place of Kapitan Cina Yap Ah Loy at Bukit Setiawangsa.

However, around the late 1800s lived a pious Sumatran immigrant in the village called To’ Janggut who kept a pony and some cattle.

As the story goes; when he died, his pony, his buffalo and his cow seemed to go mad and refused food and drink, sleeping at night by the grave. There, the pony died first, then the cow and next the buffalo.

People marvelled at this and concluded that the deceased was a saint. This belief was further confirmed when people who made vows and offerings at his grave had their prayers fulfilled.

Rich Chinese folk then built a shrine over the grave and it became known as Karamat Tangga China, drawing in worshippers from all races and religions.

How The Chinese Community Embraced The Malay Deity

The Chinese worship the keramat in the form of Datuk Kong or Nadugong. Sometimes, Datuk Kong is pronounced as Datuk Gong, Na Tuk Kong or La Tok Kong in Chinese dialects.

The term Datuk Kong is comprised of two synonyms, “Datuk” and “Kong” which means grandfather in Malay and Chinese. Kong is used as an honorific title for the Malay Datuk, or holy person, who is worshipped as a keramat or saint.

This belief is actually not too far off from the practice of Taoism which is linked to nature and worships its different spirits.

Chinese devotees worship this Malay deity in the belief that the spirit beings have the power to preserve peace, harmony and safety in residences and workplaces.

They erect Datuk Kong shrines at their work sites or compounds where their business activities are carried out and worship the keramat before going to work.

A Datuk Kong shrine is represented by an altar with Islamic elements, such as Islamic names, star and crescent symbols and even local mosque architecture. Each altar embodies one Malay deity although some altars have more than one deity such as the famous Keramat Che Nah or Keramat Tujoh Beradek at Ayer Hitam, Penang.

Due to the Datuk Kong being a revered Malay deity, the figure is dressed in traditional Malay clothing. He often holds a keris and usually wears a songkok or kopiah, and sometimes tengkolok. Chinese elements are also included, like the gold ingot to represent wealth or long Buddha-like ears as a symbol of wisdom.

As a sign of reverence for the Malay Muslim figure, worshippers present the Datuk Kong with pork-free meals and offerings also include betel leaves (daun sirih), teh tarik, kopi tarik and local fruits.

Sometimes worshipers dress in Malay clothing while praying, such as the infamous case of a Chinese fisherman dressed in a sarong and kopiah while praying at an altar in Perak back in 2019 that led to an uproar.

While he apologised for offending the local Malay Muslim population, it’s worth noting the worship of a Malay deity by the Chinese in Malaysia is a part of the community’s assimilation to local culture.

In the days of early migration of Chinese and Indians to Malaya, the mutual participation in this tradition increased the frequency of inter-dialect and inter-ethnic contact and interaction.

Cheu Hock Tong of the Department of Malay Studies in National University of Singapore pointed out that by adopting the Malay keramat into their belief system, its how the Chinese community became acquainted with local cultures and beliefs.

So while the sight of a Malay deity worshiped by the Chinese is unusual in the current socioeconomic climate, the practice is rooted in ancient beliefs unique to this region.