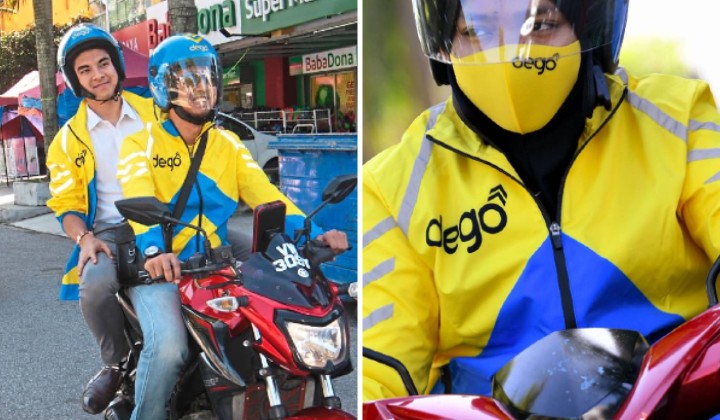 After being offline for a few years, Malaysiaâ€™s very own motorcycle e-hailing service, Dego Ride, is officially back on the streets.

The e-hailing app is now on a 6-month trial run, ferrying people and packages within the Klang Valley.

Basically the app provides an alternative for commuters looking for for a quick and cheap ride to address their last-mile connection problem, to and from other public transit systems.

Dego Ride initially laid the groundwork for motorcycle taxi services in Malaysia back in late 2016.

Then the company had to stop operations after only 3 months of service when it was banned by the government in 2017 following safety concerns.

If you’re still in the dark about Malaysia’s road accident problem, itâ€™s a well-documented fact that traffic accidents are among the leading causes of death in the country.

Motorcycles attribute to a lion’s share of the overall death toll, exceeding that of any other road vehicle in the country.

Return of the two-wheeled taxi

The motorcycle taxi issue came back into discussions late in 2019 when Youth and Sports Minister Syed Saddiq Syed Abdul Rahman made plans to bring Indonesian based bike e-hailing startup, Gojek, to the Malaysian market.

Later that same year, the Cabinet announced that the government would be allowing ride-sharing firms to operate motorcycle taxi services on probation so that the authorities can collect more data and assess the demand for such a service.

The government would also be using the time to work draw up laws to regulate the service.

But for the time being, it is still unclear whether the bike-hailing service would need riders to acquire a Public Service Vehicle (PSV) licence like how Grab drivers are required to after rules were set in place last year.

With the app now online the government is feeling optimistic about the job opportunities that would be made available for Malaysia’s youths and low-income communities.

Since restarting its service this year, the company had received over 4,000 applications from Malaysian motorcyclists, 700 of which had been vetted and approved thus far.

Just like any other e-hailing service, users may book a ride by downloading the Dego Ride app on any Android or iOS mobile devices.

But, the app would only give rides to passengers within a 10km radius from the user’s current booking location.

Each ride will cost RM3 for the first 3km, and an additional RM1 for every kilometre after that.

Assumingly, to abide by certain cultural and religious sensitivities, passengers would be paired up with a rider of their own gender for each and every ride. (So boys with boys, girls with girls. LOL)

For more details or if you’d like to join the gig economy and register as a rider, just head on over to Dego Rideâ€™s official website.

Great to know that our public transport options are growing. Let’s hope more improvements are coming our way this Wawasan 2020!