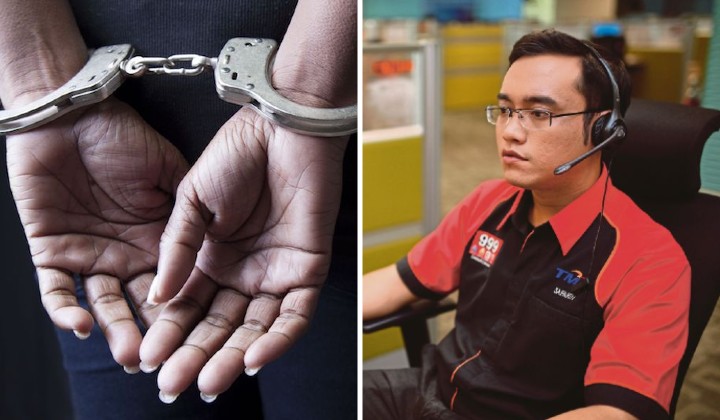 On December 9, Penang police were led on a wild goose chase after two workers from one of the island’s many Nasi Kandar joints called in a report claiming that they were robbed out of RM122,000 of the restaurant’s earnings by two armed men on a motorcycle.

The day soon turned into a scene straight out of a movie as police patrols and roadblocks were set up on all major roads in and out of the island to catch the supposed dangerous criminals in their tracks.

But, as it turns out, the dubious duo who made the police report had actually made the whole thing up in order to pocket the cash for themselves, thinking that they would’ve gotten away with it.

And as the saying goes “clever-clever squirrel jump fall to the ground also.”

The two mischiefs were later arrested and cops soon recovered the money in full.

As funny as this particular tale may be, it would seem that there has been a growing trend of people making false police reports in the last few years.

Whether to cover up their own crimes and wrongdoings like in the case of a 24-year old man who made a false report saying he was robbed of his money, when in fact he had actually lost it gambling illegally.

Or to simply try and get out of trouble like how a 19-year old teen claimed that he was a victim of a snatch theft to avoid being scolded by his mom for losing his bag.

So is it wrong to falsify a police report?

Besides being a serious waste of law enforcement’s time and resources as well as being a major pain in the a**, making a false police report is a serious offence and warrants a custodial sentence (which means that you can and would probably serve time in jail…).

The offence falls under Section 182 of the Penal Code which states that an individual who provides information either written or spoken to a public servant – in this case, a police officer – with the intent to mislead authorities or cause the authorities to prosecute another individual based on the initial claims, can be charged with a fine of up to RM2,000 or imprisonment for up to 6 months or both upon conviction.

Well if that’s the case, is making a fake police report the same as making a prank call to 999?

In 2014, it was reported that only 2.3% of over 80,000 calls received by the Malaysia Emergency Response Services (MERS 999) each day were actual emergencies.

The rest were either unintentional butt-dials, prank calls or more depressingly, those who simply call the line to chat with the operators.

But, those who are brilliant enough to fake an emergency or prank call the MERS 999 can face prosecution under Section 233 of the Communications and Multimedia Act (CMA) which carries a penalty of RM50,000 or jail time of 1 year, or both per-call.

So the next time you or anyone you know get the smart idea of trying to dupe the authorities and fake an emergency, just don’t…

Have you ever messed up so bad that you thought about faking an emergency to get out of trouble? Let us know all about it in our comments on Facebook, Twitter and Instagram.

Are Malaysian Police Allowed To Randomly Check Your Phone?