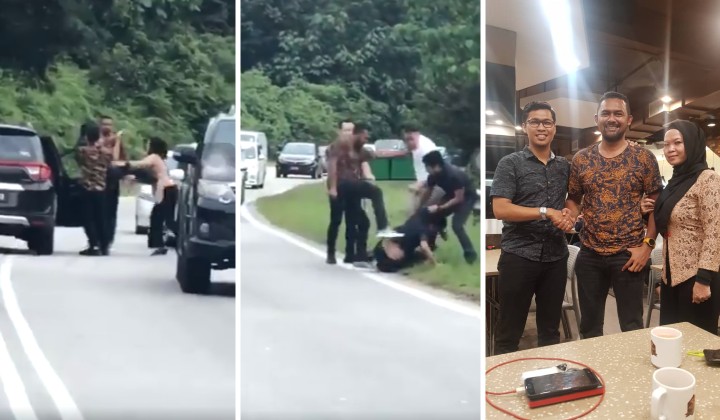 Malaysians can sometimes be a rowdy bunch, especially on the road.

Yet another road rage incident was caught on video recently and went viral on social media.

The video posted by Twitter user ikmalzaid showed a street brawl involving four men and one woman that caused quite the inconvenience for other road users.

â€œWeâ€™re back for another (episode of) â€˜Brawling on the streetsâ€™. Haha. This is the first time Iâ€™ve seen it live.â€

The video gained massive attention from social media users who came to their own conclusions and opinions on what had transpired during the incident.

She deserves that kick. Kifarah.

you wanted equality you got one.

Noticed how when the woman hits the guy, non of them men trying to stop her but once the guy hits her back, they all going nut and hit him. Lol if u act like a man, be prepare to be treat like one.

“Dear arrogant Malaysian drivers. Next time you want to have a fight, park your cars on the side first. Weâ€™re already haunted with dramas, Sinetron, Akasia, Hindi and Tamil (shows) on TV. Donâ€™t make a scene on the road.â€

Shedding some light on the matter, a posting from a man believed the be the driver of the MPV seen in the video later popped up.

According to Twitter user Shazmie, the particular episode happened when he was trying to navigate his way onto the busy road, but when an approaching car did not give him way, things started to get a bit heated.

Supposedly the woman who was driving the other car was honking at Shazmie before he himself honked back.

Shazmie claimed that the woman later got out of her car and tore off his carâ€™s window visor, before proceeding to slap him in the face, with him kicking her in response.

But, in a surprising twist. It seems that all parties involved in the street fight decided on a peaceful resolution.

In a follow-up posting, Shazmie revealed that he had met with the individuals involved in the viral incident and agreed to make amends.

Luckily for all of them, they did not meet the same fate as the two men who previously went viral after road raging at the Bukit Kiara toll plaza.

The previous duo were charged under Section 160 of the penal code for assault and causing public disturbance where both men had to pay a fine of RM 1,000.

They also spent a night together in jail where the two later set aside their differences and became friends.

Letâ€™s hope that everyone involved in the incident would learn their lesson and try to keep a cool head from now on before someone ends up in jail, or worseâ€¦