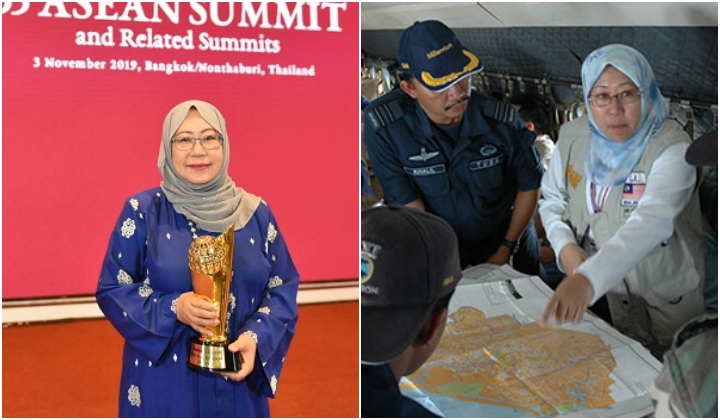 While 2019 may have been a roller coaster of a year, at least November starts off on a good note for Malaysia.

Our very own Dr Jemilah Mahmood has just bagged the prestigious ASEAN Prize at the 35th ASEAN Summit in Bangkok today (4th November)!

Not only that, she is also the FIRST Malaysian to receive this honour since its launch last year at the 34th ASEAN Summit in Singapore.

The ASEAN Prize was set up in 2018 to recognize inspiring achievements of ASEAN citizens or organisations that contribute towards community-building efforts.

For her outstanding humanitarian and disaster relief management work around the Southeast Asian region, Dr Jemilah was gifted USD20,000 (RM83,310) which she will be donating to Malaysian Red Crescent Society and Surin Pitsuwan Foundation.

Dr Jemilah is probably one of the most recognised humanitarians in Malaysia – if not Southeast Asia – for her pioneering work in setting up the medical relief charity Mercy Malaysia in 1999 to provide volunteer medical and health services to civilians trapped in crisis ridden situations.

I thought why not start a humanitarian organisation that was very health focused. That I could then inspire other people from my country, my region to contribute.
I got tired turning on the television and seeing that there was no diversity in the humanitarian sector. It was always a Caucasian humanitarian worker helping in Africa, etc.

True enough, her grit, determination and philanthropy made MERCY Malaysia the most successful nationally grown humanitarian organisations that works both at home and internationally – aiding communities in Kosovo, Syria, Yemen, Philippines, Myanmar and many more.

That’s not all, the 59-year-old obstetrician and
gynaecologist has also been busy helping make the world a better place over the
last 20 years through various projects.

As one of the most prominent humanitarian icons in Southeast Asia, here’s a quick list of her staggering achievements:

It’s no wonder she won the prize!

While we may never be able to keep up with Dr Jemilah’s international ventures, the Geneva-based humanitarian tells Malay Mail that she seeks to return home to focus on a more personal endeavour.

As she told the news portal, “If I die tomorrow, who’s going to take over from me?”