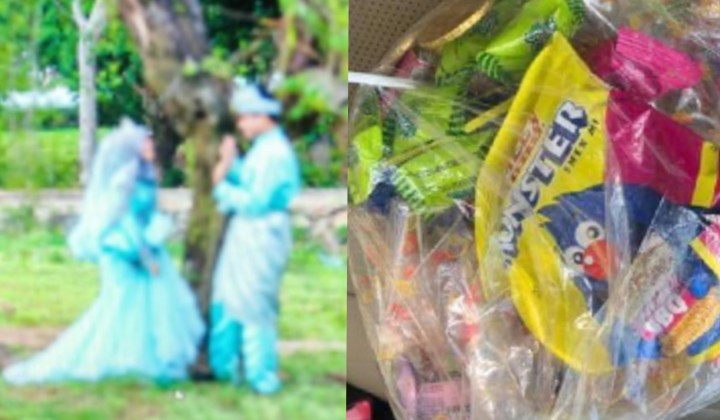 It’s always lovely to finally see our friends getting hitched. Sometimes, it really feels as though the bride and groom are spoiling us; not only do they feed us free food, we also get to leave with cute, custom door gifts.

Be Our Guest GIF from Beourguest GIFs

You would think that wedding guests would appreciate the effort the bride and groom and their family have put into organising the wedding, but apparently that’s not always the case.

Twitter user @MeowPhone took to social media to criticise a wedding guest who took pride in throwing away snacks he received from a wedding.

This was what the guest said:

“These are what my kids got from yesterday’s wedding. To me, these are fake food, filled with sugar, artificial flavouring, additives, and chemicals. We don’t regret throwing these into the trash.

I don’t even have the heart to give it to other kids. Please give out real food like fruits instead of junk food for your weddings next time.”

“Even though it’s ‘fake food’, food is still food. What if hungry, less fortunate people see him throwing away the food, isn’t it cruel to them? Let alone the wedding hosts, I’m sure they’d be devastated reading his status update”.

This tweet quickly went viral with Twitterville weighing in about how manners maketh man.

“That man shouldn’t have posted online. If he wants to throw away those fake food, just do it privately. No need to publicize it.

Have some respect for the host. What if they’re on his friend list?“

Some of the users also shared their personal encounters with “overly strict parents”.

“I know someone like this. They won’t let their kids touch candies or junk food. One time, the kid’s uncle gave him candy, and his mom dug it out of his mouth in public. Unbelievable.“

First of all, thank you for attending our wedding. I agree with what you said. I’m not too keen on giving junk food to kids either. But in our defence, the junk food was served in a buffet where you had the choice to either take it or not.

So it really makes me wonder, how is there so much junk food in that plastic bag?”

So he took the junk food home just to dispose of them right after? THE AUDACITY.

However, the wedding guest eventually retracted his statement and apologised for offending the host.

“I would like to humbly apologise for offending multiple parties, including the host, through my previous posting. I realise my mistake now. I hope you can forgive me.“

As good as it is to teach your kids healthy eating, it’s more important to teach them manners when it comes to appreciating gifts from other people, no matter what it is.