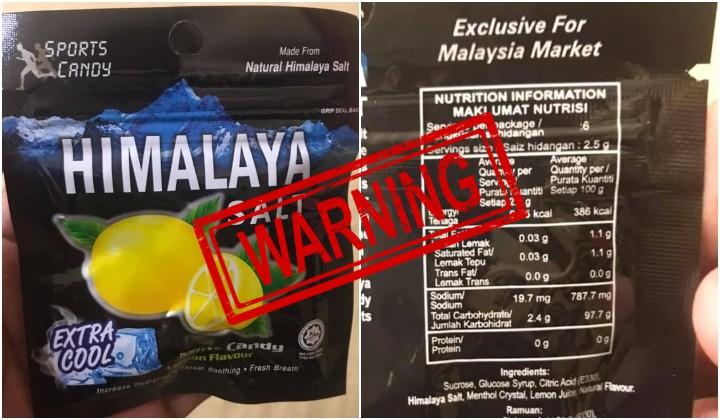 Since the last year or so, Big Foot Himalaya Salt Candy has become the talk of the country, with packets flying off the shelves like freshly fried pisang goreng.

Besides being popular among Malaysians for it’s taste, the sports candy also made headlines when it’s producer warned that there was someone selling fake versions of the salty-sweet treat.

Now, the sweet is on the lips of the people again, but this time conversation is being sparked by a dietitian and specifically on the health effects of the candy.

Dietitian, Mohd Khairul Azuan, posted on his personal Facebook account about how people have mistaken the candy for being a healthy alternative to sweets because it contains Himalayan salt and is labelled as a “sports candy”.

In the post, Khairul urges everyone to be aware of the amount of salt we’re consuming when we snack on these candies, adding that just because it’s called “Himalayan salt” that doesn’t make it okay to overconsume.

He then goes on to remind the public that our diet consists of enough (if not too much) salt already by outlining the percentage of salt most people get from their daily meals.

“In our natural food products, we usually consume about 12% sodium
Sodium added to our food for flavouring makes up about 4%
Sodium that comes from processed foods are about 77%.

That’s already enough sodium in our daily meals, we don’t need any more from candy.”

Mohd Khairul Azuan via Facebook (translated from BM to English)

Sport candies like the Himalayan Salt candy are for people who lose big amounts of sodium in their sweat, such as competitive athletes, or workers who are exposed to major heat stress, like firefighters.

Khairul lists a couple of examples of when Himalayan Salt candy might be suitable for consumption.

“- Those who are active and constantly sweat

– Those who hike for long hours

– Those who have low amounts of sodium in their blood”

Mohd Khairul Azuan via Facebook (translated from BM to English)

Everyone else doesn’t require the added salt in their diet because we’re probably eating way too much already.

[Editor’s note: Did you have banana leaf rice for lunch today? With pappadom? Well, you probably have had your fill of sodium for the day since pappadom was reported to have WAAYY too much salt in it. No Himalayan Salt candy for you!]

Khairul also warns those with specific health problems to be especially careful with their sodium levels and consumption of the candy.

He advises those with high blood pressure, heart disease or kidney disease to stay away from Himalayan Salt candy.

To pregnant women who snack on the candy to help with their nausea, he advises them to be careful, especially if you have pregnancy-induced hypertension (PIH).

According to Khairul, studies estimate that reducing your consumption of salt by just 1g can already lower your average blood pressure by 2mmHg, decrease your risk of having a stroke by 10% and your risk of heart disease by 5%.

The recommended daily intake of sodium for adults is not more than 2,300mg, with the ideal limit being less than 1,500mg.

If you aren’t sure how much salt you’re consuming on a daily basis, a good tip to try would be checking the nutritional information on the back of food packaging.

Although that doesn’t tell you how much salt is in your cooked lunch, this way enables you to keep track of the added salt in your diet, at least.

Khairul ends his post saying he especially does not understand why some consume the candy to relieve their sore throats when it doesn’t have any lozenge properties, instead, all they’re doing is unknowingly adding more salt to their diet.

Which, if you ask us, would probably make their sore throat worse because the salt will further dehydrate them.