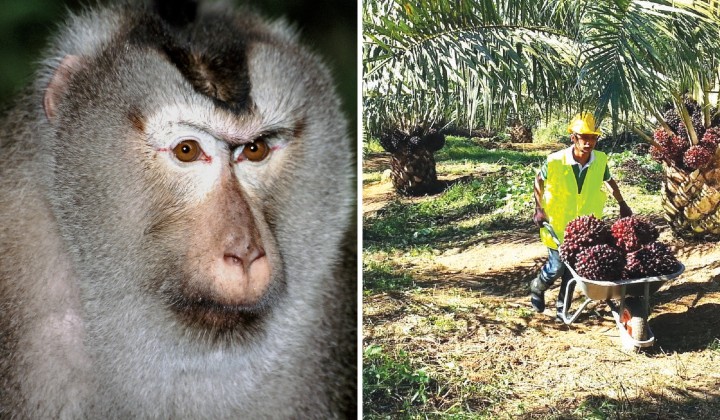 Looks like the world is a weirder place than we thought…

So it turns out that monkeys are eating rats in Malaysian palm oil plantations and saving us a whole lot of money!

In a recent study published in Current Biology, these monkeys have the potential to act as biological pest control by feeding on plantation rats.

They’re so good in fact, that scientists are estimating a group of macaques could catch (and eat) rats up to 3,000 per year.

In monetary terms, that means that losses can be lessened by USD112 or RM469 per hectare.

How much can rats do to damage crops?

The small critters are responsible for destroying about 10% of the plantation’s yield, which in Malaysia alone is equal to crops grown over up to 580,000 hectares or monetary loss of around RM4 billion per year, which is, huge.

The study, which was done at the Segari Melintang Forest Reserve in Perak found out that the macaques as effective pest control agents due to their foraging behavior where they engage in multiple methods to hunt the rodents.

The macaques would remove the leaf bases from oil palm trunks to uncover rats that seek shelter during the day and it is the most successful strategy observed.

It shows that they apply different hunting strategies compared to other rodent predators (such as barn owls and leopard cats who also happen to hunt at night).

Although they also feed on oil palm fruits (which makes them be considered as pests themselves), macaques do not damage the plantation as the rodents do.

It’s a good strategy for plantations to use the pig-tailed macaques as a way to reduce the rat population and we always encourage using natural means to control pests.

Indonesia cracks down on Malaysian-owned plantations over haze dispute