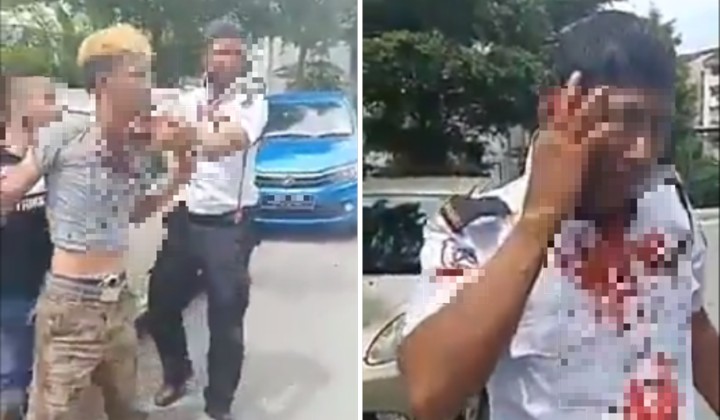 A 24-year-old Terengganu man was arrested for violently assaulting a Nepali security guard with a golf club after the guard had clamped his car that was parked at an OKU parking space in Gombak.

Footage of the incident had recently made rounds on social media.

The video showed the culprit and the victim struggling by the side of the road, with both of them covered in blood believed to be from the guardâ€™s wounds.

Another man can be seen in the video apparently trying to stop the altercation.

The smug attacker has then pulled away and escorted from the scene.

From the video, it can be seen that the guard was visibly shocked and in pain, with blood dripping down his face, his shirt soaked red in blood.

According to police, the 30-year-old guard suffered injuries to his right arm and ear.

As the story goes, the guard had clamped a grey Honda Jazz parked illegally in a Disabled Parking spot.

The attacker along with another man (believed to be the same one seen in the video) came up to him asking for the clamps to be removed.

The guard refused the request, stating that they would need to pay a fine for their offence.

The 2 men then tried to remove the locks themselves with the disapproval of the guard, telling the men not to vandalise the clamps.

It was then that the attacker proceeded to punch the guard in the face, then took out a golf club from the boot of the car and swung it at the victim.

The case is currently being investigated under Section 324 of the Penal Code for voluntarily causing harm with a weapon.

It was noted that the attacker also had a previous record of drug abuse.

Malaysians were naturally angered by what had transpired.

I want to see the look on his face behind bars.

“The guard was dripping in blood. I hope this wannabe gangster gets caught.”

What’s even scarier was the fact that social media detectives were quick to the task, managing to track down the attackers Facebook page, drivers licence…

And even a copy of the man’s school exam results!

Goes to show that even if you think of yourself as a bad a** gangster, you can never hide from the ever-watchful eyes of Malaysian netizens.