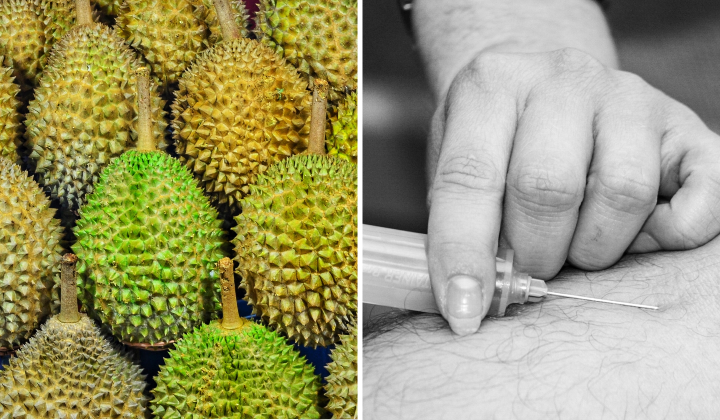 Durian exports are proving to be a lucrative business for Malaysia and it’s no surprise considering how much we Asians love our durians (except for a very small percentage – we’re looking at you, durian haters!).

The export of durians is making so much money that it contributes about RM500 million to the nationâ€™s annual total export where even the government expects that durian exports to China would hit 1,000 metric tonnes every month.

No Sleep No Fomo Durian GIF from Nosleepnofomo GIFs

But nobody would’ve suspected that the king of fruits would also be used as a vessel to export an infamous recreational drug, heroin.

In a recent smuggling attempt, (which sounds like it came straight from a crime drama) a Malaysian woman reportedly tried to smuggle opioids by stashing them in a bunch of durians.

She was caught by the authorities who found the drugs in the hollowed-out fruit which were on their way to Hong Kong.

Out of the 20 polystyrene foam boxes she was exporting, 4 were found laden with the opioid weighing 6.13 kg and valued at RM953,529.

She tried to export the drug-laden fruits from Sultan Abdul Aziz Shah airport before it was seized by authorities during a raid recently.

The white powder was wrapped in clear plastic before it was put inside the fruit.

The woman has been placed in remand for five days for investigation.

Nobody Wants Bald, Thornless Durians But Scientists Are Pushing To Make More Anyway

Scientists: We Just Made Durian Fast Chargers A Reality & Itâ€™s Better For The Environment