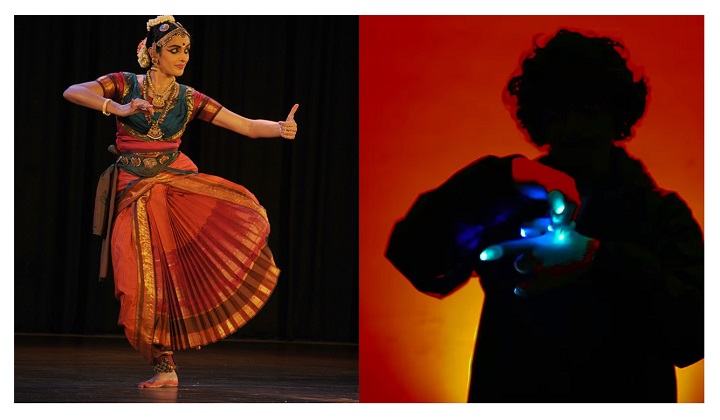 Hands contorted into intricate shapes, the stamping of anklet-decked feet or even Kareena Kapoor crooning “Bole Chudiyaan” – that’s what most people imagine when they think of Indian dance.

But, India is a lot more that.  There’s a very unique subculture scene that thrives in the subcontinent.

For instance, did you know that gloving is India’s trippiest dance? And there’s more people doing it than you’d think.

Meet Mohit Yagnik, aka Frodo, a 26 year old in Mumbai who spends his days twirling his flashing fingers around to electric beats.

One of the few pioneers of the Indian gloving scene, he delved into this trippy dance after he was plagued by years of insomnia.

People fight their own demons on a daily basis, mine don’t let me sleep in the night.
I chose to fight it with the one thing that I love, which is gloving

Mohit Yagnik aka Frodo via 101 India.

While some may associate the psychedelic dance with drug use, it’s actually an incredibly hypnotic art form that gained popularity in 2006 at raves and electronic music festivals.

With flashing LED lights on the tip of gloves (hence, the name gloving), one simply moves, twirls and twists their fingers to create a mesmerising light show best enjoyed at close range.

Once an alien concept in the subcontinent, Frodo tells us that the Indian gloving scene is now on a high. Glovers have started popping up across the nation from Delhi, Hyderabad, Bangalore and Mumbai.

That’s right, the culturally rich nation of India is home to Asia’s LARGEST musical event – the Sunburn Festival – where Frodo was an official flow dancer as well.

This love for synth and electric beats isn’t limited to the Mumbai, though. Several modern music festivals have popped up along the ancient land in the last few years, many which had people raving – literally and figuratively.

For one, the culturally rich city of Jaipur in the northwest state of Rajasthan has been at the centre of some of the most epic dance festivals in the country.

Amidst the desert backdrop and ancient palaces, several thousand people lose themselves as the beat drops in festivals such as the Dunes Music Festival, Magnetic Fields and Ragasthan.

The stark landscape of the sand dunes, clear starry night skies and how the sound travels freely through the desert air creates an otherworldly experience.

While gloving is a typically Western-orientated cultural phenomenon, India’s glovers can’t help but give the trippy dance an unmistakable masala flavour.

The cool thing about Frodo’s gloving is how he tries to incorporate Bharatanatyam mudras (gestures and positions, usually of the hands) in his movements.

In case you’re unaware, Bharatanatyam is one of the oldest classical dances of India, known for its sharp movements, complex footwork and of course, incredibly sophisticated hand gestures.

An expression of South Indian spirituality, the venerated dance went through quite the historical  battle to survive from its inception in the 6th century (around the beginning of the Middle Ages).

During the British colonisation, the female dancing figures were considered no better than harlots in the eyes of Victorian moral values.

Thankfully, the Tamil community in South India were opposed to such a ridiculous ban and Bharatanatyam was welcome back to its rightful place as a respected art form following India’s independence in 1947.

Everything You Know About Eggs Are Wrong: 7 Facts You Need To Know

It’s a narrative that’s remarkably similar to gloving. Misunderstood as drug accessory, the dance that was once banned in the US is now finding a new life as music festivals shed their narcotic past with the mainstream popularity of electronic music.

The coexistence of EDM and Bharatanatyam is best seen in the city of Chennai in Tamil Nadu.

On one hand, regular EDM gigs break up the busy rush of city life including The GO:MADRAS Electronic Music Festival where revellers party on Chennai’s beaches to the tracks of international DJs.

On the other hand, you’ll see Madras Music Academy standing tall in Chennai as an institution set up in 1928 by Indian activist and classical artist E. Krishna Iyer to save Bharatanatyam from dying out.

However if you really want to see the true roots of the dance, a trip to Tiruchirappalli (also known as Trichy) is called for.

Like most Indian classical dances, Bharatnatyam found its beginnings as a spiritual dance in temples.

As a city with roots dating back to 3BC, Trichy is a land filled with ancient temples. From the Rockfort Temples to the historic Jambukeswarar Temple, age old carvings of deities in various dance poses can be seen along with the echoes of the temples’ dancing past.

Whether you’re a lover of modernity or tradition, India is arguably the only place that gives you the best of both worlds.

With AirAsia’s direct flights from Kuala Lumpur to Jaipur, Chennai and Tiruchirapalli, you can witness gloving and Bharatanatyam’s coexistence for yourself.

What’s more, with all-in one way fare from only RM169 for BIG Members, now would be the best time to explore India’s beautiful dances, new and old, in person.

To enjoy this incredible deal, booking period is from NOW until 27th October 2019, for travel until to 31st May 2020.

Just log on to airasia.com to begin your journey to India where Passion Meets Travel!

Do E-Commerce Sites Like Lazada Prove The Power Of The Internet During The Movement Control Order Period?

Double Happiness: Why The Chinese Love ‘Doubles’ At Every Joyous Occasion