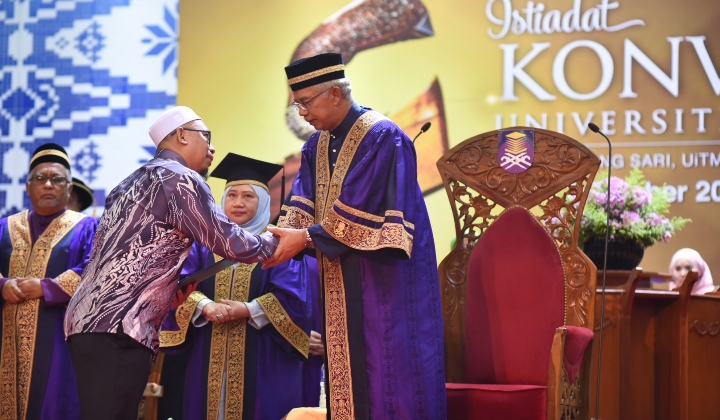 Dengue fever is not a stranger to Malaysians, most of whom have suffered it themselves or at least had a family member or friend who has been sick with it before.

Itâ€™s so common, that most Malaysians donâ€™t pay much heed to it.

However, a video shared on Twitter recently has reminded us how deadly dengue can actually be.

The 30-second video shared by @Dzarah shows her father stepping up onto the stage during a UiTM convocation ceremony to receive a certificate.

My dad tried his best to be strong but deep inside his heart, i know how sad and heart broken he is :’). He lost his little girl in a blink of an eye. We miss her so much and we want you to know that we are so proud of you, our little angel, Allahyarhamah Aina Fatin Ajwa ❤ pic.twitter.com/LPlJcSiDiK

According to Dzarahâ€™s tweets, we learned that her sister, Aina Fatin Ajwa had passed away due to dengue shock syndrome (DSS) a.k.a denggi berdarah.

This year, dengue cases in Malaysia have actually reached an all-time high, with almost 80,000 cases and 113 deaths reported between January and August alone.

In moderate dengue fever cases, consuming enough water (and reportedly drinking papaya leaf juice) can flush out the virus and lead to all symptoms disappearing after the fever subsides.

However, in severe cases, the patientâ€™s condition may suddenly deteriorate after a few days of fever; the temperature drops, signs of circulatory failure appear and the patient may then rapidly go into a critical state of shock.

DSS is characterised by bleeding that may appear as tiny spots of blood on the skin (petechiae) and larger patches of blood under the skin (ecchymoses).

This shock can cause death within 12 to 24 hours.

Social media users who were saddened by the tragic story sent their condolences to Dzarah and her family for their loss.

i cried watching this

may Allah give you all strength.
al fatihah to arwah.

Tears dropped the second I watched your father got up on stage. Stay strong, sheâ€™s in a better place now. Al-fatihah

My sister Nana was her best friend masa diploma dulu. She loves ajwa very much and always missing her. My heart 💔 when see her like that bcs she never show her feelings/emotion in front of our family before. Ajwa is such a lovely girl. Semoga arwah tenang disana.. Aamiin

“I was also saddened while I was doing my work as the event photographer. I hope your sister is placed among the believers”

We would also like to extend our deepest condolences to Dzarah and her family and urge all our readers to stay safe during this dengue season!