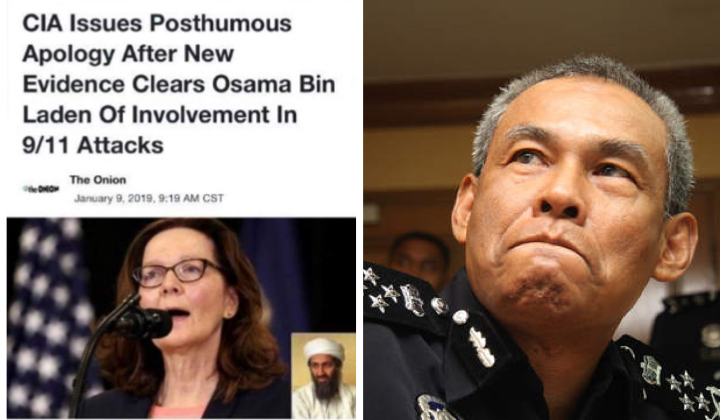 In this day and age of technology, the internet is not only filled to the brim with information, facts, and news, but it is also filled with trolls, fake news, myths, misinformation and satire.

While most can tell the difference between truths and falsehoods online, unfortunately, there are still many who are naive.

This is aptly proven by the continuous spam messages in your family WhatsApp groups and fake news articles that appear on your Facebook timeline by your well-meaning, gullible friends and family.

Today, we learned that even our very own honourable ex-Inspector General of Police, Tan Sri Musa Bin Hassan can also become easily fooled by satire news.

The former head of Malaysian cops tweeted an article by American satire news site The Onion, believing it to be true.

The article claimed that the American Central Intelligence Agency (CIA) issued an apology to Osama Bin Laden for “wrongly” accusing (and killing) him of the tragic September 11 attacks in 2001.

Obviously, this was a joke. But, Musa didn’t get that. Even after social media users repeatedly told him so.

“If it is untrue, then the American government needs to make an official statement denying it’s facts”

Musa then slowly realised his mistake, but not without highlighting how useless and confusing such news can be… exactly how you’d expect a frustrated pakcik to react.

“Funny news that isn’t funny that illustrates the extreme ignorance of its writer. Satire is not beneficial nor does it provide any useful information. Instead, it just confuses the public.”

Malaysian Twitter users (predictably) didn’t miss the opportunity to inform the retired police officer that he was the only person who was confused today.

“Tan Sri, you’re the only one who is confused.”

This incident can point out the possible dangers of a former police officer falling victim to fake news online, such as the fact that it potentially illustrates how gullible our police force can be and bring into question their investigative skills.

However, we would like to point out that ACTUALLY Musa WASN’T THE ONLY PERSON TO BELIEVE THIS NEWS.

It is unclear how Yahoo! News managed to pick up a piece by The Onion, although they did categorise the story under their entertainment section and credited The Onion in the article’s byline before subsequently taking it down.

Besides Snope, another fact-checking site, Africa Check, also covered The Onion’s piece clarifying that the news was indeed satire after it was reportedly shared over 45,000 times on Facebook.

Fools! All Of You! – Hocus Pocus GIF from Fool GIFs

Which means that technically, Musa was one out of at least 45,002 people who were fooled by The Onion.

At the end of the day, this instance is a funny reminder that we must all take care before we share when we come across startling and unusual stories online.