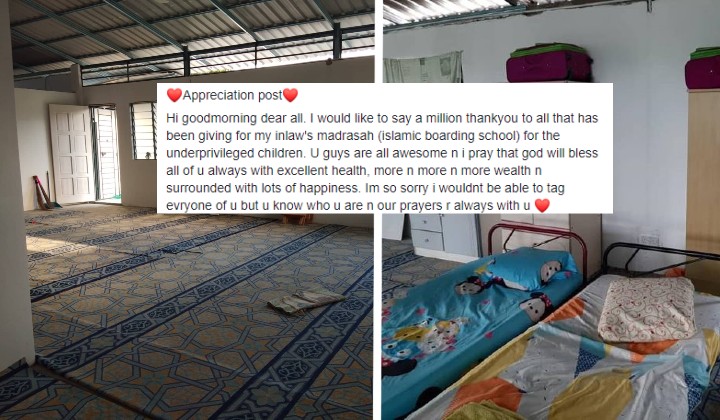 Generous, kind, and trusting: that’s Malaysians in a nutshell. This is the side of Malaysia that Farah Zee encountered when she asked for donations for a madrasah (Islamic boarding school) run by her family.

Two schools (one for boys and one for girls) were built on a piece of land in Kapar, Klang for underprivileged children to have a place to stay and study.

Farah’s father-in-law, Mutalib, had been prepared to pay for both madrasahs out of his own pocket, but an unforeseen business closure limited his income and the family quickly realized that they could not buy necessities for the boys’ dorm.

Unable to proceed with the dorm, Farah Zee made a request in one of Malaysia’s many freecycling/gifting groups on Facebook called Beli Nothing Project.

After hearing the plight of the students, donations from generous members of the BNP came pouring in for the school.

The action only proves how generous Malaysians are, as Farah Zee mentioned that all the donors were supportive, and never brought up any racist issues.

She said that she was originally afraid to ask from the group as the items were for an Islamic school, but the need was so great that she overcame that apprehension.

She is overwhelmed by the generosity shown by the donors, all who asked for nothing in return and simply provided the items out of the goodwill of their hearts.

Without BNP we will still be struggling to complete the home and there would be unnecessary spending instead of utilising the resources to focus on the pupil’s development and well-being.

Farah Zee on the generous donations of Malaysians

All the kids are underprivileged children from poor families, single parent families, and orphanages.

The school is led with minimal staffing who volunteer their time to teach the children for free. Expenses are covered by Mutalib and his family or from donations.

Currently, there are 30 girls and 3 boys staying at the dorms, but the school will be able to take in more kids as they obtain more furniture.

Want to join the generous group of gifters? Find a Beli Nothing Project on Facebook in an area near you!

How To Get Rid Of Unwanted Items Responsibly In M’sia