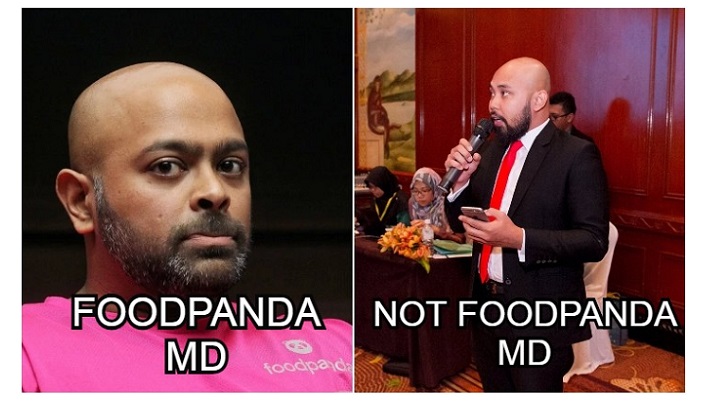 October kicked off with a bang in Malaysia as the once
favourite Foodpanda food delivery service quickly became the nationâ€™s most
hated.

Riders were protesting the new payment scheme, Youth & Sports Minister Syed Saddiq got involved and eventually, it all went down in flames when Foodpanda stuck to their guns.

#BoycottFoodpanda, #DeleteFoodpanda and #UninstallFoodpanda DOMINATED Malaysian social media as a hailstorm of criticisms were fired at the start-up.

Managing Director of Foodpanda Malaysia, Sayantan Das was especially slammed when he said that theyâ€™ll be sticking to the scheme.

In all this mess, one unfortunate Malaysia found himself caught
in the crossfire for an incredibly silly reason.

On the evening of 9th October, Twitter user @soulzoul aka Zul innocently uploaded a picture of him with the caption â€œMe at werk.â€

Apparently, his bald head and beard combo together with a corporate suit caused confusion among some misguided keyboard warriors.

While there are some similarities between Zul and Sayantan, he feared that Twitter vigilantes might hunt him down and beat him up, mistaking him for the Foodpanda MD.

So he made a 3D chess move with a hilarious name change:

The clever move of the misfortunate twin clearly tickled the funny bone of Twitterjaya with his exasperated tweet getting 7.7K retweets and 8.4K likes.

And i thought i was the only one thinking that! Serious i kena bukak and zoom to check! 😂😂

Thankfully, Zulâ€™s pre-emptive strike worked. He told TRP that he managed to avoid any online harassment.

â€œSome were ready to curse me but stood down when they read the thread.â€

@soulzoul aka Not Foodpanda MD.

Some concerned netizens tried to advice Zul aka Not Foodpanda MD to change up his style be shaving his beard and growing his hair.

However, Zul has no plans to switch up his look.

While he finds the mix-up funny, this situation does have a worrying element as Zul couldâ€™ve been subject to serious online bullying.

A 2018 global study among 28 countries found Malaysia as the 6th worst nation in cyber-bullying, and the second worst in Asia, faring slightly better than India.

TRP urges everyone to use the internet responsibly and refrain from cyber-bullying (weâ€™re looking at you, Bawang Army).