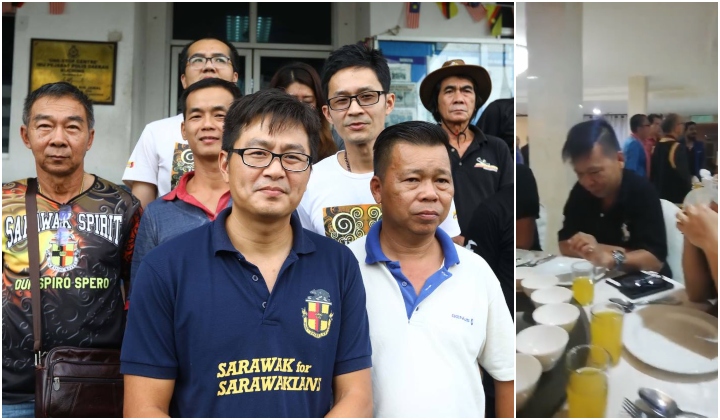 A video of a group of people refusing to stand up while our national anthem, â€˜Negarakuâ€™,  played in the background went viral over the weekend.

The short 22-second video, allegedly taken during a fundraising event by Parti Bangsa Dayak Sarawak Baru (PBDSB) on Friday (Sept 27), has more than 7,000 comments and 4,700 shares (at the time of writing).

The video was shared by Facebook user Shaow Tung Leong.

â€œI will not stand and sing Malaya national anthem, Coz non of my business.â€

Social media users criticised the group of people in the video for being disrespectful towards the countryâ€™s national anthem.

Because â€œNegarakuâ€ belongs to all Malaysians.

“This is not a question of “Malaya” or “Sarawak” but a symbol of our unity.”

“Throw these people out of Sarawak”

“Just wait until this rationale is adopted by your own kids. They will become louder than you all. If it’s for S4S then it’s ok. Just worried about when it’s time to take care of you. Those who are rude will breed a generation that is worse than the one before.”

“You’re not Sarawakian, you’re a terrorist. Sarawakians are nice and smart. If you wanna know the true Sarawakian warriors, I’ll tell you. Rosli Dhobi, Awang Ramli, Bujang Suntong, Rentap, Sharif Masahor, Kanang Anak Langkau and many more. These are the real warriors.”

The group of people in the video have since admitted as being members of pressure group Sarawak for Sarawakians (S4S).

Speaking to Free Malaysia Today, Shaow Tung Leong a.k.a Alex Leong explained that S4S members refused to stand during the national anthem to silently protest against the government, saying â€œMalayaâ€ had been unfair to Sarawak and itâ€™s people.

The S4S members are dissatisfied with the government over some promises made to the state which were unfulfilled, bringing up that Sarawakâ€™s oil and gas resources had been exploited for the past 56 years.

â€œIn fact, a few days ago, Prime Minister Dr Mahathir Mohamad announced that the federal government was unable to fulfil its promise to raise the oil royalty to 20% for Sabah and Sarawak, as stated in Pakatan Harapanâ€™s election manifesto.

“So why should we stand up when the national anthem is played?â€

He also opined that â€˜Negarakuâ€™ was not the anthem of the federation, but only â€œMalayaâ€™sâ€ anthem, highlighting that Sarawak only formed Malaysia with Malaya and Sabah in 1963.

Yesterday, news portals reported that after the police received a report of the incident, the eight individuals in the video were called in to give their statements and then later released.

Now, the police are investigating the matter under Section 8 (3) of the National Anthem Act 1968, which states:

â€œWhenever the National Anthem is played or sung all persons present shall stand to attention as a mark of respect.

Failure to comply with subsection (1) without good and sufficient cause shall constitute a show of disrespect.â€

Do you think everyone should stand up when ‘Negaraku’ is played?