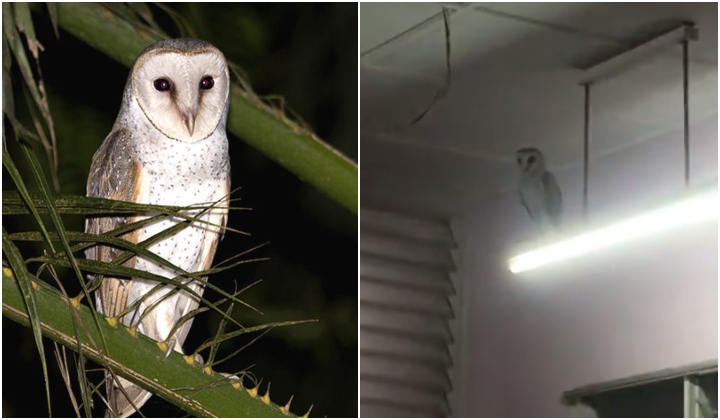 Dorm life is an exciting time for any young Malaysian.

Especially for those whose university/college is located in rural areas. The lack of entertainment outlets and malls means you gotta find other ways to entertain yourself.

Also, you tend to bump into an array of wild animals.

And this point is proven by a group of students who recently stumbled upon a large barn owl inside their dorm room.

Twitter user @darwishhh__ shared a hilarious short video of the magnificent creature which had somehow found its way into their room.

what a majestic creature !!!! pic.twitter.com/ne4HaWdkJN

The students somehow managed to catch the large owl and later set it free outside.

Judging by the appearance of the owl, our expert, in-house (Google) researchers believe it was likely a Barn owl, locally known as the â€œBurung Pungguk Jelapang Padiâ€ and scientifically known as Tyto alba.

The barn owl is found almost everywhere in the world, the ones in Malaysia are known as the eastern barn owl.

Barn owls can be identified by the mottled shade of grey or brown on their head and back with white to brown underparts that are sometimes speckled with dark markings. They also have characteristically heart-shaped faces which are usually white.

Here in Malaysia, the barn owl is commonly found in oil palm plantations close to lowland primary rainforests and paddy fields where they feed on small rodents, such as rats.

In fact, these magnificent birds specialise in hunting animals on the ground and nearly all of their food consists of small mammals which they locate by sound.

Theyâ€™re so good at hunting for rats they are regularly used in those paddy fields and in oil palm plantations as an eco-friendly pest control method.

This is mostly due to the fact that they help reduce the use of rat poison and is therefore much safer for both humans and other animals (besides rats. Definitely not safe for rats).

Their hunting skills can be further reaffirmed by the fact that in 2015, the Subang Jaya Municipal Council introduced barn owls as a biological agent to control the rat population in SS15.

And we all know how bad the rat situation in SS15 is.

When large numbers of small prey are readily available for barn owls, their population can expand rapidly. Hence, they are globally considered to be of least conservation concern.

Although their species is far from being endangered, weâ€™re really proud of the considerate students who took the time to catch the owl and set it free!