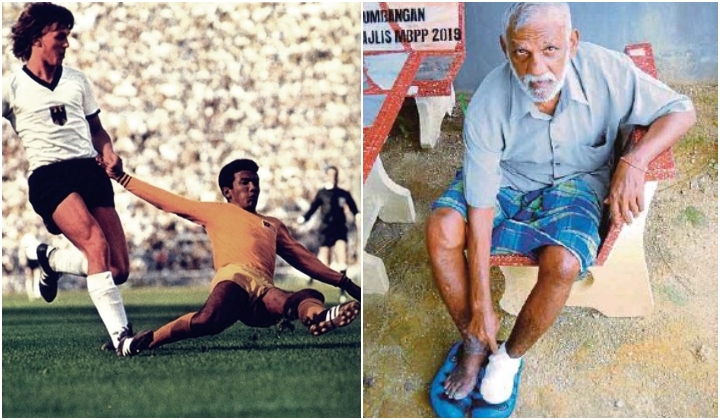 We laud our national athletes who make our “country’s name smell
good” (mengharumkan nama negara) on the international stage.

We cheered for them when they beat
athletes from big name nations, like during the 1972 Olympic Games in Munich
when the Malaysian football team beat US by 3-0.

47 years ago, Harimau Malaya took to the football pitch in then West Germany, playing three matches against the formidable teams of West Germany, Morocco and United States.

It was the FIRST TIME that the
Malaysian football team qualified for the Olympic Games.

While our tigers lost against West
Germany and Morocco, they gave United States quite the thrashing by scoring three
goals against their zero.

Naturally, this was cause for ecstatic celebrations back home and the footballers were welcomed with cheers and thunderous applause.

Among these national heroes was Krishnasamy Veloo, who played midfield during the victorious match against US.

Back then, he was hailed as a hero but now the ex-Olympic footballer is sadly forgotten, alone and broke in a Penang nursing home.

The 72-year-old ex-Olympic footballer spends his days sick and alone in a Penang nursing home where he struggles to keep up with healthcare expenses as well as the RM1,000 nursing home fee.

According to New Straits Times, he retired as a sergeant major from the prisons department and his only source of income is his government pension.

However, he does receive the odd donation here and there.

Football Association of Malaysia have given him assistance as well as caring members of the football fraternity, The Friendship Circle.

New Straits Times also reported in May that National Athletes Welfare Foundation (YAKEB) has pledged to help him.

The diabetic’s left knee is amputated due to the disease and he also suffers from failing eyesight and hearing.

Krishnasamy’s wife who is equally old and frail, stays with her daughter’s family while his two children are unable to care for him.

The former footballer joined the
national team in 1967 and played alongside great legends such as Soh Chin Aun and
Ali Bakar.

His plight is a truly tragic tale
of a forgotten hero.