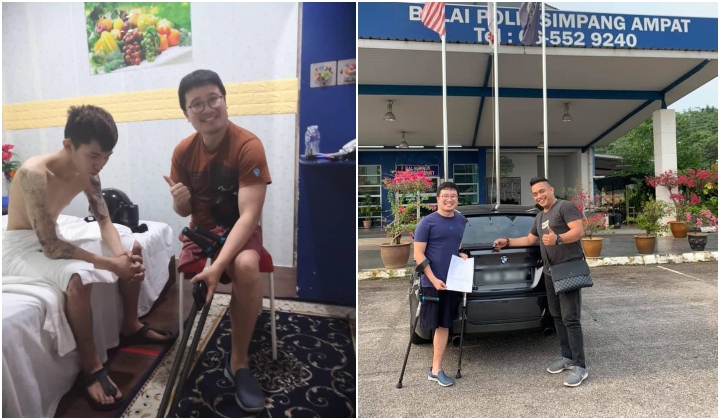 The awful thing about scammers is that by the time you realise youâ€™ve been duped, they have made off with your valuables leaving hardly a trace behind.

Sure, you can make as many police reports as you like, but the probability of you getting back your belongings tend to be really slim.

Which is why this story of Facebook user, Melvin Tong, who managed to miraculously find his car after losing it for several months to a scammer, is so REWARDING.

Melvin had shared bits and pieces of the story on Facebook as the events that took place lasted over the span of several months. We contacted Melvin directly to find out the full story.

SCAMMER WAS INITIALLY A CUSTOMER

Melvin runs a car rental business and the perp, a.k.a Eagle Yeoh, a.k.a Yeoh Wai Chean was a regular customer of his.

Although Eagle would consistently pay his car rent late, at the end of the day, he would always end up paying the full amount owed.

One day, Melvin mentions to Eagle that he intends to sell one of his cars, a BMW 320i.

Melvin and Eagle make a deal which allows Eagle to test drive the BMW over a certain period of time. At the same time, Eagle is to pay Melvin for the car in monthly instalments.

As usual, Eagle doesnâ€™t pay the instalments on time as promised.

For several months, Melvin chased Eagle for the payments and Eagle would regularly respond to Melvin with all kinds of excuses.

NO PAYMENT AFTER FULL THREE MONTHS

Melvin finally decides to urge Eagle to meet up face to face with him so that they could at least get some paperwork of the sale settled and have agreements signed.

Still, Eagle came up with excuses as to why he couldnâ€™t meet with Melvin.

Melvin then proceeded â€œthreatenâ€ Eagle saying if he still refused to meet, he would “make Eagle famous”. Eagle replied saying â€œdo whatever you need to doâ€.

What Wtf GIF from What GIFs

Now, you would expect Melvin to be the person who extorts Eagle to get his car back.

Yet, interestingly enough, Eagle apparently starts extorting Melvin by asking Melvin TO PAY HIM if he wants his car back.

THE SEARCH IS ON

Through some investigative efforts, Melvin managed to connect the information given by previous victims and identified Eagle’s friends and family members.

â€œGood news. Through my resources. I found him.â€

From the information gained, Melvin miraculously manages to track Eagle down to a cheap hotel in KL.

Melvin, together with two of his friends (gotta bring some muscle for a stint like this) went to the hotel in search of Eagle and called the police for back up.

â€œReason why he was in towels is because he was expecting a girl.

And I didnâ€™t allow him to put on his cloths because I donâ€™t want him to run!â€

Melvin lures Eagle out of the room and confronts him. He finds out that Eagle had sold his car to an alleged loan shark for RM3,000.

Melvin tells Eagle that the police are on their way and this succeeds in scaring Eagle enough that he contacts the loanshark who bought the car from him.

Unfortunately, since Melvin had voluntarily handed over the car keys to Eagle, there was no criminal case here. Only a civil-dispute case.

Hence, the police could not take any action.

LOANSHARK SOLD THE BMW TO ANOTHER LOANSHARK FOR RM9,000

â€œAh Long informed me they disposed (sold) the car. Not their business anymore and donâ€™t want to get involved. Not surprised.

Melvin sought the help of local repossessing companies to help flag his BMW 320i.

The repo companies posted details of the BMW 320i on their app (yes, apparently they have an app!) for their men to keep an eye out for the car and contact Melvin if they spot it.

The day after Melvin found Eagle, he got a call by a repo-man who had spotted his BMW 320i at a workshop in Melaka.

Before Melvin could get to Melaka, a man who claimed ownership of the BMW 320i (allegedly another loan shark) appeared at the workshop and attempted to drive the car away.

The repo-man confronted him informing him that the BMW 320i is an asset under civil dispute and showed him and the workshop owner a copy of the police report made by Melvin the night before.

Upon seeing the police report and not wanting to be involved, the owner of the workshop handed the keys over to the repossessor.

However, the loanshark was not too happy and offered the repossessor a handsome compensation if he allowed him to leave with the car.

A scuffle ensued, but the repo-man eventually managed to speed off with the BMW 320i!

The repo-man delivered the BMW 320i to a police station in Simpang Ampat and Melvin met him there to be happily reunited with the car.

What a wild ride from start to finish! This story could be a Hollywood action blockbuster, but we’re happy Melvin managed to get his car back in the end!!