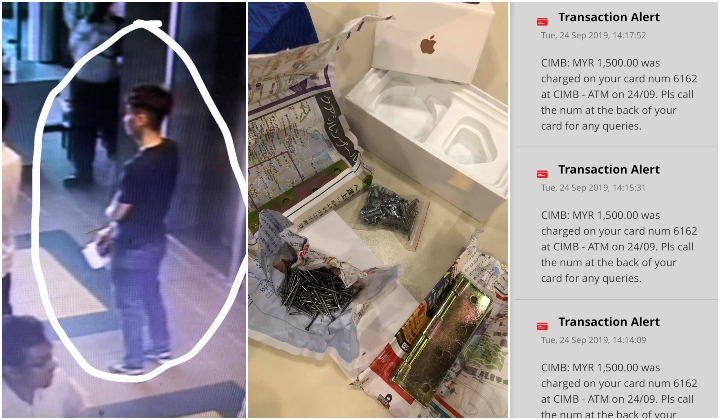 We hear of people falling victim to scammers pretty often. When reading these stories, we think: how could someone be so gullible to believe the lies of a scammer?”

Well, the thing about scammers is they know exactly how to make you feel secure and comfortable enough that you divulge sensitive information to them.

Otherwise, they wouldn’t be called scammers now, would they?

Its A Trap GIF from Starwars GIFs

Facebook user Jin Wai Choo had the unfortunate luck of becoming a victim to one very smooth scammer who obviously came prepared.

Jin had noticed an advert on Malaysian-based online shopping platform Mudah, for a Huawei P30 Pro that was being offered at a price marginally lower than the market price.

The advert had been posted by a “Felix Tan”, knowing that the price was a steal, Jin contacted “Felix” for a COD deal.

The two planned to meet for the COD at Starbucks in Solaris at 2pm on Sept 24, on the day of the deal, Jin did not suspect anything amiss.

Upon arriving at Starbucks, Jin meets “Felix”, a Chinese man in his late 20’s, early 30’s carrying a blue bag containing a sealed iPhoneXS. According to “Felix”, the iPhoneXS was for another “customer”.

“Felix” tells Jin that he needs to “go up” to get the Huawei phone. He also says that he would need to process the payment using the credit card terminal in his office.

Initially, Jin refused, insisting that he would follow him and they would do the transaction together on the spot.

“Felix” rejects the suggestion saying that his “boss” wouldn’t allow him to bring “outsiders” into the office as he is purchasing the phone for Jin at a “staff’s discount”.

“Felix” instead reassures Jin and offers to leave the sealed iPhoneXS and “his own” credit card as he passes Jin a credit card with the name “Felix Tan” printed upon it.

Jin then passes “Felix” his credit card at 2.10pm.

While ‘processing’ the payment, “Felix” tells Jin he had swiped the card and asked if Jin received an OTP code – a code he didn’t receive.

“Felix” follows up the question with a phone call asking Jin if he would just pass “Felix” his pin to settle the payment as soon as possible.

At this point in the story, Jin admits that giving “Felix” his pin was definitely a mistake on his part.

However, considering Jin was holding the iPhoneXS AND “Felix’s” credit card, he felt secure enough to trust this person.

At 2.14pm, Jin receives a notification from CIMB that RM1,500 was withdrawn from his credit card at a CIMB ATM.

It then dawns on Jin that the transaction should not be a ‘withdrawal’, and it should definitely not take place via a CIMB ATM.

IMMEDIATELY, Jin dials the CIMB Hotline to block his card. The time is 2.15pm.

The rest of the story is told best in Jin’s own words:

“Alas, the hotline rang for a good 5 seconds before you hear the ‘Thank you for calling CIMB, for English press 1’.

Following that, you’re forced to listen to a LONG NOTICE on CIMB’s latest bank charged (A good 1 minute which felt like 10 minutes).

I’m sweating bricks. Next you hear, for credit card opening or activation press 1, for banking etc press 2, AND FINALLY, for reporting on lost or stolen card PRESS 3, this was at 2:18pm.

Took a good 10 seconds when a customer representative answered the phone, gave her my details and told her to block my card immediately.

As usual, they need to VERIFY YOU even when you’re panicking as s**t!

In total, 6 transactions were made in that short span of time (5-6 minutes).”

After posting the incident on Facebook, Jin was contacted by a previous victim of the same scammer.

In fact, the scammer has supposedly been caught previously due to his dubious ways and had served a jail sentence before being released.

BTW, judging by one of the pictures shared by Jin in his post, the “sealed iPhoneXS” turned out to be a box filled with nails and screws.

Jin is appalled at how long it took his bank to respond to emergency situations such as his and believes that if he was able to block his card sooner, it would have saved him a whole lot of money.

TRP has since contacted CIMB for a comment on this issue and are still awaiting a reply.

In the meantime, we urge our readers to stay vigilant and be careful of scammers!