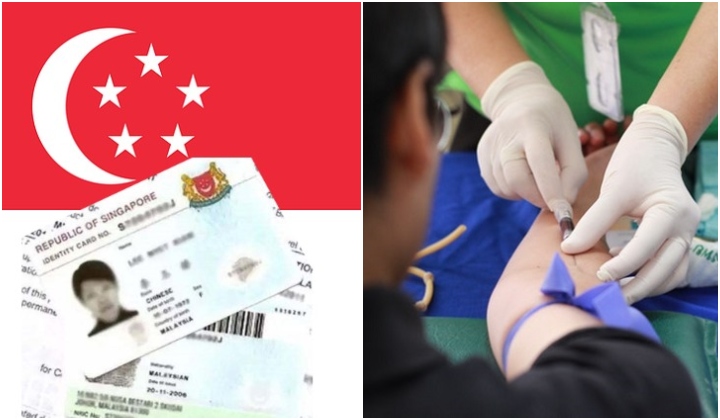 In another episode of Malaysians embarrassing us overseas, a HIV-positive Malaysian has been jailed in Singapore for possibly infecting 6 people with the dangerous virus.

According to Channel News Asia (CNA), the 35-year old man suspected that he could have HIV but refused to get tested because he was scared of losing his Singapore permanent residency (PR) status.

FYI, Singapore is one of the few developed nations that restrict long-term stay for HIV-positive foreigners.

Whatâ€™s worse is that he is suspected of spreading the human
immunodeficiency virus to at least SIX other people â€“ all who tested
positive after having sex with him.

HIV virus infects and destroys cells of the immune system. This can lead to acquired immunodeficiency syndrome (AIDS), when over 20 opportunistic infections happen due to a severely weakened immune system.

It all started in 2010, when the reckless man was
informed by a previous partner whoâ€™d tested positive for HIV.

The Singapore Health Ministryâ€™s National Public Health Unit
(NPHU) then contacted him and advised that he get tested as he was exposed to
the virus.

However, the freelance hairdresser and fashion designer lied to NPHU and told them that he gets tested regularly and the last results were negative. The truth is that he never got tested after 2008.

The reckless man apparently continued along his merry way
around Singaporean bedrooms as the NPHU reached out to him over the years every
time he was named as a sexual contact of someone who tested positive for HIV.

Hereâ€™s a rundown of his escapades:

He had unprotected sex with someone he met online and did
not inform them of his HIV/AIDS risk.

After their third rendezvous, the unwitting partner developed
a fever and was diagnosed with HIV. He stated that the Malaysian man was the
first person he slept with after testing HIV-negative in 2011.

When the infectious Malaysian met a new partner, the other person
asked if he was HIV-positive.

They proceeded to do the horizontal tango and the new partner was diagnosed in August 2014. His last test in March 2014 was negative.

He was also contacted by NPHU at least 3 times in 5 years.

But â€œThyphoid Maryâ€ feigned ignorance, claimed he was busy
with work and refused to answer further calls from the health agency.

Then an informant spilled the beans on the Malaysian to Singapore Health Ministryâ€™s Surveillance and Enforcement Branch in 2016.

They were told that the Malaysian had slept with six partners who were all diagnosed with HIV after intercourse.

Cornered, he was ordered
to take a HIV test by Singaporeâ€™s Health Ministry and finally tested
positive in February 2017.

BUT, the contagious Malaysian was only arrested A YEAR LATER for drug offences (smoking methamphetamine).

Thatâ€™s not all, he was arrested AGAIN this April for smoking meth.

Finally, he was hauled to court and sentenced to 3 and a
half years in jail for spreading HIV under Singaporeâ€™s Infectious Diseases Act and
drug-related offences.

In Malaysia, one can be punished for passing HIV under section 12 of the Prevention and Control of Infectious Diseases Act 1988 and also under the Penal Code for negligence, malignance and causing hurt.

TRP would like to take this moment to advise our readers to always practice safe sex.

In fact, read on about how Malaysian AIDS council has collaborated with a local condom company to spread awareness on HIV & AIDS HERE.