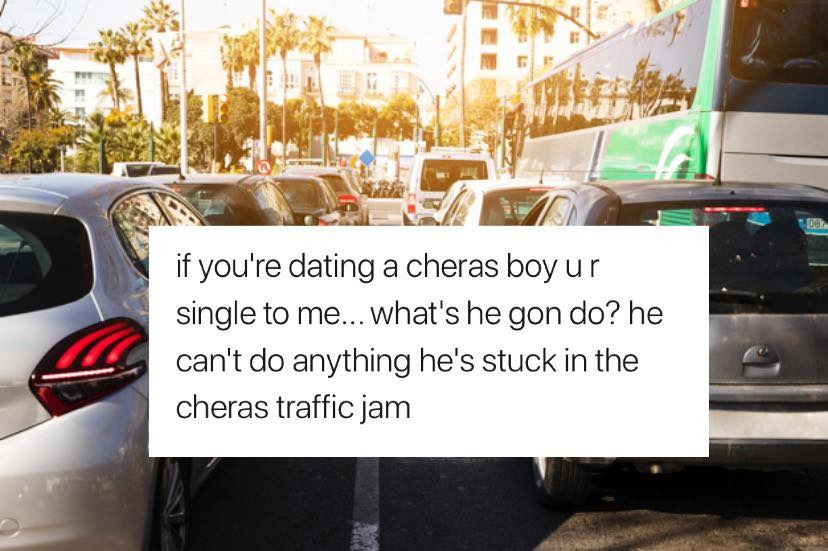 Looks like thereâ€™s a new meme in town! If youâ€™ve been on the front pages of Twitter recently, you probably have seen this format that has been taking the internet by storm.

According to Know Your Meme (2019), the â€œYouâ€™re Single To Meâ€ meme is where a person says that if â€œyouâ€™reâ€ dating a specific type of person, youâ€™re considered â€œsingleâ€ to them.

This is usually followed by a specific scenario that ties back the point to the previously said person. Seems pretty understandable, right?

What was especially amusing for us was to see the Malaysian versions of these tweets, as most of these hit home pretty hard!

if you're dating a cheras boy u r single to me… what's he gon do? he can't do anything he's stuck in the cheras traffic jam

3. How many times have you PJ-ians heard this one before?

If you're dating a pj boy you're single to me… like what he gon do? Have his only hobby be playing futsal with the boys 5 times a week?

4. We couldnâ€™t leave out the obvious one tooâ€¦ #sorrynotsorry, guys!

If you're dating a subang girl, you are single to me… What's she gonna do? She can't even do anything because she's lying on the hospital bed after sipping 2 cups of boba tea every single day

5. Looks like thereâ€™s a new meaning to the Sunway jam huhâ€¦

if ur dating a sunway guy, ur single to me. tf he gonna do?? heâ€™s stuck in the line for a free sunway lagoon pass

6. University students arenâ€™t safe either from this meme, it seems!

If you're dating a Universiti Malaya boy, you're single to me. What's he gonna do? Study in the 70th best uni in the world based on qs rankings with an amazing law faculty comprising of excellent lecturers and staff whilst boasting the biggest law library in Malaysia?

7. Yikes! How often does this happen in UiTM, guys?!

If you're dating a UiTM boy, you're single to me. What is he gonna do? Travel by car to beat me up when his car is actually clamped in campus???

8. Never forgetting our fellow Malaysians that are a plane ride away!

If you are dating a Sarawakian, you're single to me. What are they gonna do? Bring you gardenia every time they came back from kl???

If youâ€™re dating a melaka boy you're single to me. What's he gonna do? Get caught in traffic light every 200m?

Which one of these made you laugh the hardest?

Let us know, or even better, drop us some of your variations of this meme! Nothing unites us Malaysians more than a good sense of humour.Â