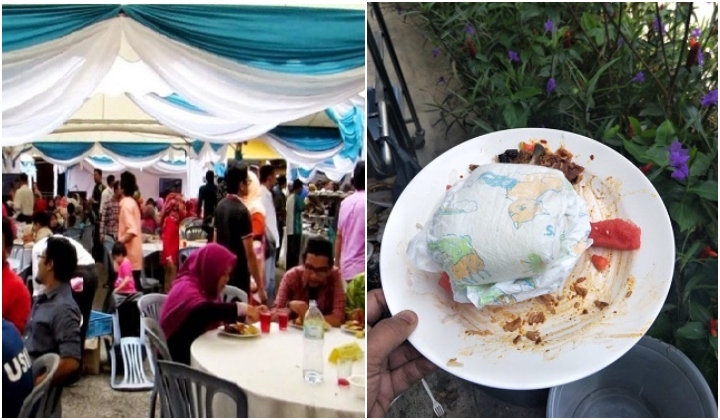 We all have our fair share of wedding guest nightmare stories,
from drunken fights to inconsiderate picture-taking in the middle of the ceremony.

However, Twitter user Faqihuddin (@Faqihh_94) may just have the WORST tale ever when a wedding guest left a used diaper on their food plate!

The disgusting image was accompanied by the caption:

The unsavoury leftover was assumed to be left behind by parents for the waiters to throw away.

Faqihuddin explained that the wedding kenduri (feast)
took place inside an airconditioned hall. He was infinitely thankful that the party
poopersâ€™ â€œgiftâ€ did not perfume the venue.

With over 7.1K retweets, Twitterjaya found the scene both gross and hilarious.

Translation: “I was just about to say; “What a pretty burger wrapping.” Then I opened the picture….. Haih, what is this? No civic values at all.”

Translation: If it wasn’t for the picture of the cat, I would’ve thought it was a burger.

McPooPoo is more accurate i guess 😂

Translation: “I think they left their brains inside the pampers too.”

Translation: “Maybe they were inspired by influencers eating in pampers?”

Some even shared their own sh*tty experiences.

Translation: “I experienced this during the last Raya Haji. It was super crowded. I was sweeping by the drain and found a pair of pampers thrown away just like that. Even when people have become parents, they still don’t have the brains to dispose trash properly.”

Translation: “You try working in an eatery. I’ve experienced people leaving pampers underneath the tables and chairs. We give them good service and they give us poop. POOP! Brainless customers”

The culprit behind this faux-pas has not been identified, but TRP urges the public to PLEASE DON’T do something like this. It’s all about basic courtesy and civic-mindedness.

Interstate Travel Allowed For Couples Who Are Getting Married

Gamers Get Creative To Recreate Wedding In GTA V