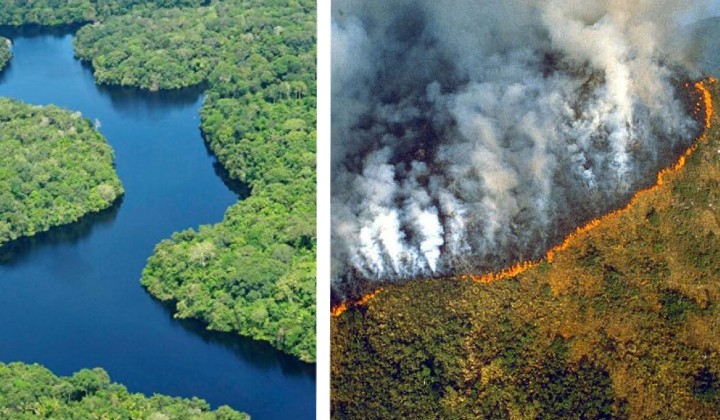 Yes, the Amazon rainforest has been- and still is!– on fire for 3 full weeks.

It’s resulted in smoke being seen from the space station, SÃ£o Pauloexperiencing a 3pm daytime blackout, and the record for forest fires being broken.

🌎Just a little alert to the world: the sky randomly turned dark today in SÃ£o Paulo, and meteorologists believe itâ€™s smoke from the fires burning *thousands* of kilometers away, in RondÃ´nia or Paraguay. Imagine how much has to be burning to create that much smoke(!). SOS🌎 pic.twitter.com/P1DrCzQO6x

THE AMAZON is on fire rn and media coverage has been slim to none. We need to save our earth!!!!! #PrayForAmazÃ´nia pic.twitter.com/gnpagP0Klz

Brazil president Bolsonaro who also told his citizens “to eat less and poop every other day” is now dismissing the deadly fires, saying that it is the “season of the queimada“, which is when farmers use fire to clear land.

Wildfires do often occur in the dry season in Brazil but they are also deliberately started in efforts to illegally deforest land for cattle ranching, similar to what Indonesia does.

The fire in the Amazon is critical, not just because it is unprecedented, but because its impact is global.

In the face of extreme climate conditions, deforestation must stop. We have to protect what little trees we have left.