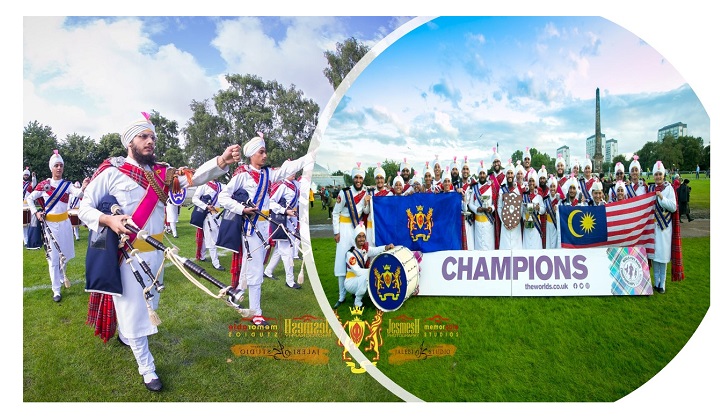 Bag pipes and kilts are hardly typically Malaysian, but that
never stopped the Sri Dasmesh Sikh Pipe Band from being the best at it.

In fact, the Malayisan Sikh pipe band were so good, they emerged as CHAMPIONS at the World Pipe Band Championship in Scotland!

Competing in the world series for the second time, the pipe
band marched, drummed and puffed their chests to top the Grade 4B category last
Saturday (17 August).

They also bagged the top prize for Overall, Drumming AND Best Parade!

The World Pipe Band Championships by the Royal Scottish Pipe
Band Association is an international meet for pipers and drummers from all over
the world to compete and showcase their skills.

This year’s world championships in Glasgow saw 195 bands from 13 countries come together.

Of those 13 nations, Malaysia was the ONLY Asian nation to take part this year.

To prepare for this prestigious competition, the band practiced
tirelessly for 13 months, marching and playing at least 6 hours a week.

Tirath told Asia Samachar that this win was the band’s Merdeka gift to the nation as the Jalur Gemilang was raised in pride on the Glasgow Green.

In case you wondered why the Sri Dasmesh Pipe Band looked so familiar, they’ve been playing at major international and national events for many years now.

Named after the 10th Sikh Guru, the band was formed
by brothers Sukdev Singh, a commercial pilot, and Harvinder Singh in 1986.

Catch their winning performance below: