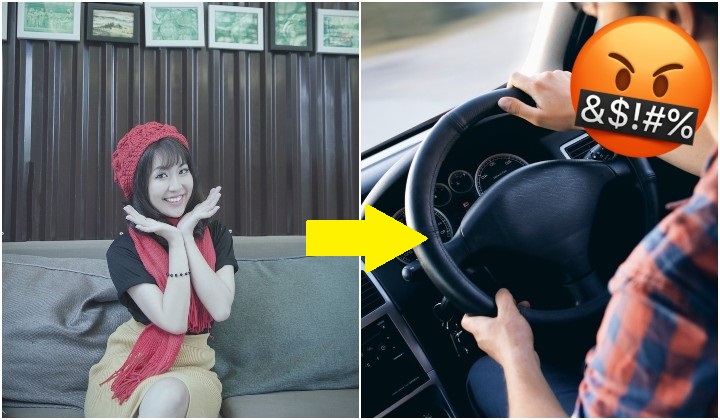 Ever got into the car of a super nice friend (you know, the kawaii one whoâ€™s always buying you nasi lemak?), and suddenly youâ€™re praying to every God out there in fear of your life?

Yes, weâ€™re all too familiar with the scene of the mildest person you know transforming into an expletive screaming machine, dropping F-bombs faster than Eminem.

There’s no doubt that the question of this transformation has crossed your mind at least once in your life. So, after another heart-pounding driving session with that kawaii killer friend, we also ask:

â€œWhy do super nice people turn into angry drivers behind the wheel?â€

Well, according to a social psychologist from Villanova University, itâ€™s because being in a car makes you feel invisible and detached from others.

â€œThat feeling of anonymity can sometimes mean that we behave in ways that we wouldnâ€™t otherwise because weâ€™re less likely to be held accountable.â€

It’s also related to a psychological effect known as â€œdeindividuation.â€

This is when humans lose their individuality when they become part of a group. In this phenomenon, they also deinvidualise others who are part of another group.

This causes us to sort-of view other people as â€œless humanâ€ and we become less empathetic towards them.

So when we get on the road, we donâ€™t see other road users. We see machines.

When you combine this with the sense of anonymity, humans tend to act in a manner thatâ€™s different from their normal, socially acceptable behaviour.

â€œWhen we feel anonymous, we lose focus of our moral compass and are more likely to behave badly.

We also perceive very little threat of retaliation in these circumstances, so there is little cost [to] us [for] behaving badly.â€

Yea, weâ€™ve wondered about this as well.

According to research by David Herrero-FernÃ¡ndez from University of Deusto, Spain, the answer is NO (kinda).

â€œMan needs different stimulation to get angry on and off the road. However, when he experiences anger, he will express it the same way in any context.â€™â€™

DavidHerrero-FernÃ¡ndez via Association for Psychological Science.

The study, which had 198 participants fill out self-assessments, concluded that while general anger and driving anger are linked, screaming at the fool who changed lanes without signalling does not mean youâ€™ll scream at someone IRL for cutting queue on the LRT.

However, the study DID find that people expressed their
anger the same way on and off the road.

Which means, if you scream when angry, youâ€™ll scream if driving angry.

So, we can conclude that super nice people turn into angry
drivers behind the wheel because of an â€œUs vs Themâ€ phenomenon.

Now that we know the reason, itâ€™s important that we make a conscious effort to remain civil while driving on the road.

PDRM has also stated that Malaysia had MORE road accidents in the first 6 months of 2019 compared to last year!

This is certainly a cause for concern as Malaysia has the THIRD HIGHEST death rate from road accidents in Asia.

So please keep cool on the road guys, your lives depend on it!