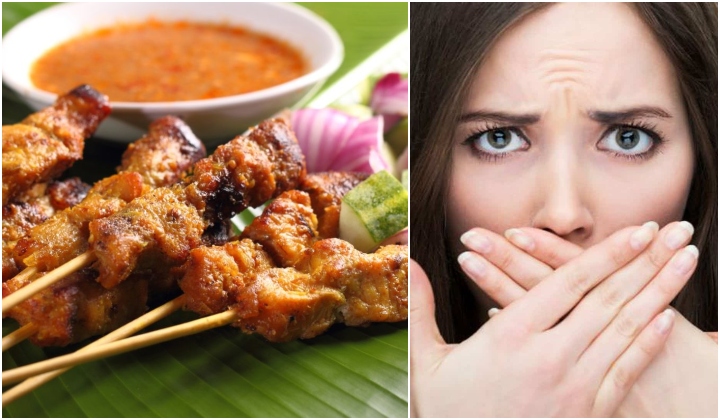 It is no secret that Malaysians are really protective over their food.

Just last week, Malaysians got mad at online foodie website Tasty for cutting jackfruit the wrong way, and a random Twitter user for dipping his 3X Spicy Chicken into his Cempedak McFlurry.

Now, in the latest edition of â€œMalaysians getting mad at people over our local dishesâ€, the Health Ministry (KKM) is being attacked for attacking satay.

On Saturday, the official Twitter account for the KKM shared an article written by a doctor that explains how the barbecued meat skewers could cause cancer.

The tweet mentions that when satay is barbecued, it undergoes a chemical reaction called the Maillard reaction.

The tweet then explains that the Maillard reaction can produce acrylamide which it turn has been known to cause cancer in humans.

Now, KKM is THE official government ministry responsible for the health of the people.

Yet, the people got mad at the ministry for ruining satay for them!

“Please la KKM.
If a dish also has an antidote, please share that too.
For example, satay can be carcinogenic due to its charred areas. But it can be overcome by eating satay with fresh cucumber.
Donâ€™t be like this.”

“May I please know which source states that acrylamide is produced from chicken protein and sugar? Please share the link to the source. Thank you in advance.”

“But satay is how my grandmother makes a living.”

KKM’s Twitter admin refused to take the criticism sitting down though, and clapped back at their haters.

TWEET: “Youâ€™re disrupting peopleâ€™s satay businesses. Satay Kajang has been around for three generations. No one has died from eating their satay. Stupid ministers result in stupid statements like these.
If you want to talk about the dangers of food, read about dangers of rice. Rice was previously harvested once a year, now itâ€™s harvested twice a year. There are toxins in rice and no one is talking about that.”

KKM reply: “The article did not say â€œdonâ€™t eat satayâ€. What was emphasised was eating it in moderation. Maybe you are confused because you read too much. Thank you.”

TWEET: “All proteins that brown when exposed to heat undergo the Maillard reaction. Why must satay be sacrificed? Happy Eidul Adha.”

KKM reply: “Today is Eidul Adha. Satay is among the more popular dishes served and eaten by everyone. Satay can still be eaten, but in moderation. Do practice healthy eating habits.”

TWEET: “Be prepared. If you serve satay at your open house later, I will scold you directly.”

KKM reply: “I’ll assume that you are confused between “don’t eat” and being given the advice to “consume in moderation”. It’s OK, I’ll think positively of you.”

Hi, we want to encourage Malaysians to read more and be more alert towards health-related issues. That is why we implement controversial elements to sell this tweet and the acticle.They will know after reading to the end. The target is to achieve awareness. Thanks.

We arenâ€™t chemists, so weâ€™re in no position to support or refute satay eating. Though, weâ€™ve heard that eating everything is moderation is pretty good?