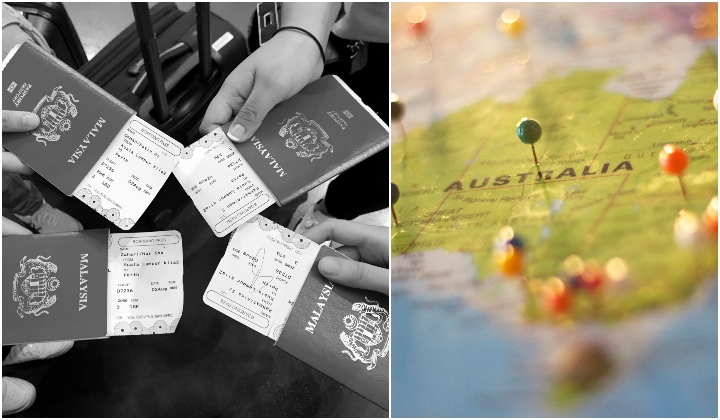 Malaysians are reportedly the worst visa abusers when it comes to overstaying in Australia.

Now, more Malaysians are sharing how it has become particularly difficult for them to enter the country as they face racial profiling due to the irresponsible actions of their countrymen.

A young woman shared how she faced this exact scenario when trying to travel to Perth, Australia, recently. Her blow-by-blow post of the harrowing experience on Twitter went viral with over 17k retweets at the time of writing.

According to @reenzahari, although her travel visa was approved and she managed to successfully check-in for her flight, she and her five friends were denied permission to board their plane to Perth.

@reenzahari and her friends were standing in line at the final security check when the airlineâ€™s ground staff scanned her ticket and drew a cross on a piece of paper which had her ticket sequence number.

She and all her friends were then instructed to proceed to security and told to sit quietly to the side.

Then, a middle-aged woman claiming to be from the Australian immigration approached them and took their passports.

Without any introduction, the woman immediately asked the five young women how much money they had on them.

Shocked, @reenzahari informed the woman that they each had around AUD350 on them and that she had also brought a credit card.

Show Me The Money! GIF from Jerrymaguire GIFs

The woman smirked and told them that amount of money would not suffice for their stay in Australia. She then proceeded to ask them for their itinerary, disallowing them from referring to any notes written in their phones.

However, before they could answer, she again dismissed them and implied that they had “other” plans for visiting the country.

M: I know u hv somnthg else to do
I: What is it tht we want to do?
M: Idk, you tell me. (Sambil tekan dkt â€œyouâ€, mcm gaya omputih marah anak bila anak mnipu)

After the embarrassing exchange, the woman forbade them from boarding the plane saying she â€œcanâ€™t let” them go to Australia because she “does not see them as touristsâ€ as they did not have a sufficient amount of cash on them.

â€œBecause i dont see u as touristsâ€

Apparently, the five young women later asked one of the security officers at the boarding gate why they werenâ€™t allowed to board, who told them that it was because they were suspected of travelling to Australia to work as fruit-pickers.

While it appears that @reemzahari and her friends made no fault when planning their trip to Perth, itâ€™s absolutely unfortunate that they ended up being racially profiled in that manner.

Twitter users were appalled that @reemzahari and her friends were treated that way. Though, some admitted that they werenâ€™t surprised considering the fact that there were many illegal Malaysian migrants in Australia.

Wow looks like Aussie immigration is using every excuse to stop Msian from traveling there. Canâ€™t really blame them tho, those Msian who are still living there illegally and refuse to come back are one of the main reason. Maybe avoid traveling there until they come up with a soln

This is probably the karma we get for treating those foreigners working in our country poorly and disrespectfully not to mention how we look at them, and always blame them for every single crime happening in malaysia

Profilers mmg ada kat airport KLIA2, thanks to the emergence of apple-picking Malaysian overstayers in Australia. Itâ€™s unfortunate that this has happened to u. I honestly think its a form of discrimination. Canâ€™t believe they had the balls to do it on Msian soil.

There were also some netizens who offered several solutions. Including urging the Australian government to state minimum requirements for Malaysians who intend to travel to their country.

to avoid racial profiling
1. wear decent looking clothes
2. bring enough cash on hand each
3. be well adapt w your own itinerary
4. print and file all the documents
5. be prepared to talk about 3&4 well
6. be cool about the whole travel thing. read a book or stg

If there is any minimum requirements to enter Australia please include them in the visa system.