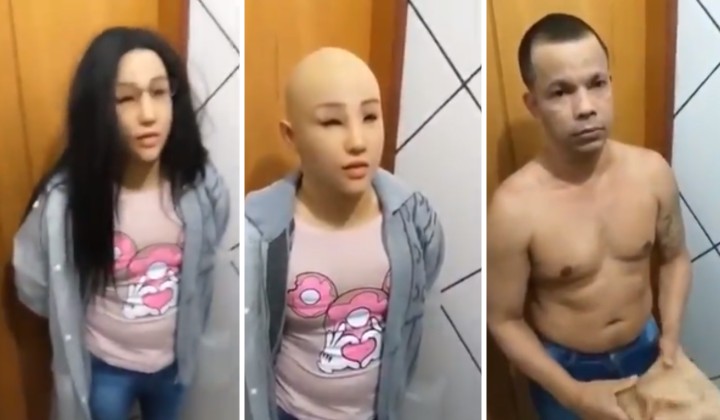 A Brazilian gang leader had planned an audacious prison break by disguising himself as a teenage girl.

Clauvino “Shorty” da Silva tried to escape his incarceration at the Bangu prison in Rio de Janeiro by taking on the appearance of his 19-year-old daughter by wearing a spooky silicon mask and wig, complete with a cute outfit to match.

Apparently, the 42-year-old had planned to simply walk out the front door of the facility, leaving the girl, who was there on a visit, to take his place.

However, the convict’s attempt at freedom was foiled when prison guards caught on to the scheme as the “man” tried to leave.

The footage shows the “girl” unmasking “herself” revealing the true identity of the short muscular man underneath.

Brazilian authorities are currently investigating the matter to determine whether his actual daughter had any involvement in the escape plot and if anyone else was involved in the plan.

Shorty was reportedly the leader of Brazil’s notorious Red Command which is labelled as one of the most dangerous and powerful criminal gangs in South America.

And Shorty was no stranger to prison breaks too…

Previously, the gang leader had been among the 30 prisoners who had fled the Instituto Penal Vicente Piragibe prison by crawling through sewers back in 2013, but was soon caught.

Excuse Me GIF from Whitechicks GIFs

Car theft gang nabbed by police, has been stealing cars since April

Amazon rainforest has been burning for 3 weeks, but Brazil president unconcerned

‘Spiderman’ arrested in Melaka for charging tourists for pictures