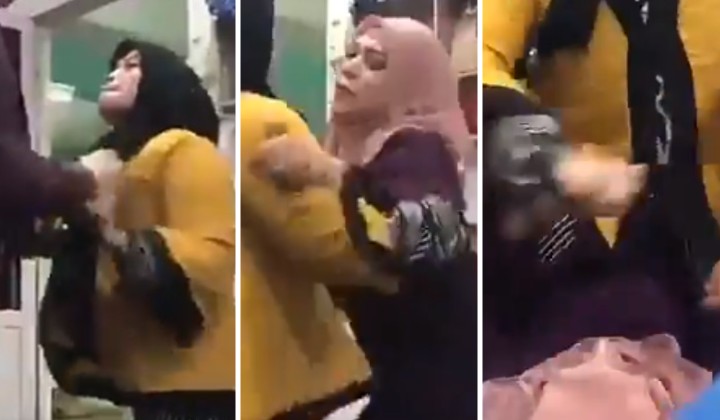 Footage of a domestic dispute is making rounds on social media.

The video shows what appeared to be a lovers quarrel between a disgruntled wife, her husband and a woman believed to be the man’s side chick.

Like a scene ripped straight out of a telenovela, the 1-minute clip shows the angry wife tackling and pinning the other woman on the floor of an office room, while repeatedly pounding on the woman with her fists.

In the video, the husband along with another unknown woman can be seen trying to stop the enraged wife from beating the mistress senseless.

“Please don’t make a scene in my office…”

“Please don’t bring our problems outside of house…”

Said the husband as he tried to break up the fight, via Twitter

“This is definitely not over b*tch!” said the outraged wife as the video cuts away.

Naturally, Malaysians who caught wind of the scandalous video came to comment on the exposed private affair.

Feminism seemed to reign supreme as both men and women agree that the resentful wife had every right to be angry at both the husband and his mistress.

Oh my God. For obvious reasons they have something going on. The guy keeps blaming the wife and the hoe was hiding at the back of the guy. Wtf?

“I stan with the sister in yellow…”

While others questioned the wife’s actions for attacking the mistress instead of her cheating husband.

“Idiot, why are you beating the woman and not your husband? The affair wouldn’t have happen unless your husband pandered to the woman.”

However, , it would seem that the suspiciously well-made clip was not what netizens made it up to be!

Apparently, the heated scene had been nothing more than a behind the scene snippet from an upcoming TV show. (so it WAS a scene from a telenovela… LOL.)

The original clip is believed to have been shared by actor Izz Faeiz on his official Instagram page.

On the account, the actor even shared shots of the recording set in which the viral video was taken.

Welp, guess that’s one mystery solved! Best not to be too quick to judge next time around…