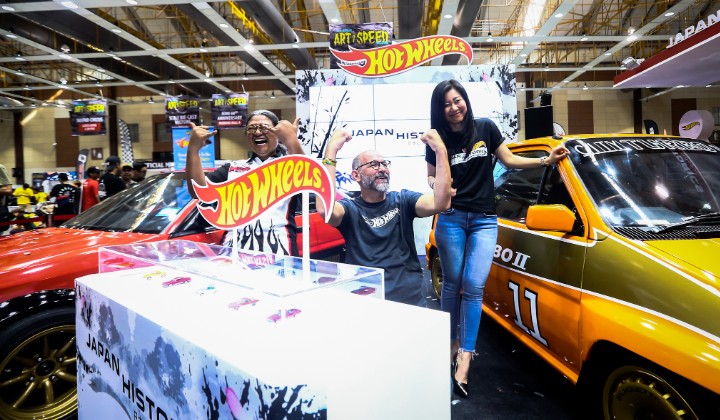 Things were blazing last weekend as Hot Wheels Malaysia unveiled the new Japan Historics 3 Series collection, its latest set of one of a kind collectable diecast car models at the Art of Speed 2019 Autoshow in MAEPS, Serdang.

The reveal saw a fiery assembly of five â€œLegendary Japanese Carsâ€, inspired by the feverish custom car culture from the land of the rising sun.

Heating the launch, even more, was the appearance of two life-sized custom cars from the new lineup!

A sexy-red Nissan Skyline R31 and a sleek, bright orange Honda City Turbo II which had fans (this writer included…) completely drooling over it.

The contest gave Hot Wheels enthusiasts a chance to show off their creative customizing skills by making their very own personalized custom car.

While another contender, Mohammad Shahmi Shahiran, became the runner up with the entry of his furious Bone Shaker Custom model car.

Taking time to mingle with fans (and signing autographs…) of the famous toy company, Steve briefly spoke about his fiery fun career.

Having more than a decade’s worth of Hot Wheels designing under his belt, Steve was humbled by the passion and interest shown by Malaysians towards these tiny toy clunkers.

He mentioned that in recent times, more people had jumped on the bandwagon as compared to his childhood years playing with toys.

Nowadays, playing with cars was no longer considered to be an exclusively â€œboyâ€ thing to do.

â€œIt’s good for the culture, you don’t need these hard lines between men and women and what people are expected to do, you know.”

The Japan Historics line of cars is scheduled to be out sometime in 2020.

Be sure to keep an eye out and collect them all!