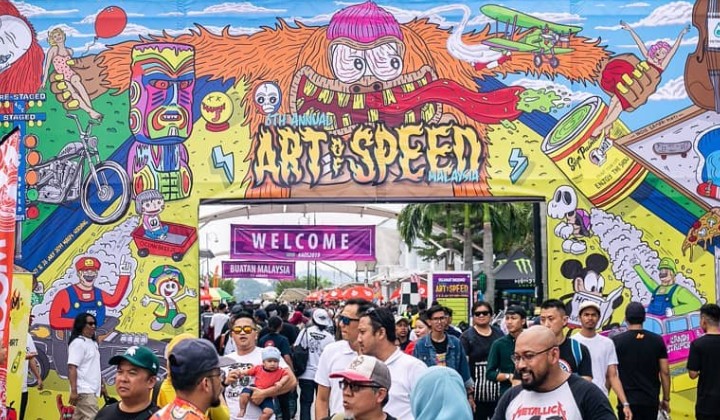 If dope cars and phat bikes turn you on, then the Art of Speed Malaysia 2019 Autoshow is definitely THE place for that primal greasemonkey enthusiasm.

AOS 2019 brings you nothing but pure machine-madness as it celebrates the art of custom car culture.

The event honors the talent, resourcefulness, and creativity of local and international gearheads as well as their radical creations.

Some 55,000 visitors, filled the halls at the Malaysia Agro Exposition Park (MAEPS) in Serdang over the weekend beating to the drum of Malaysiaâ€™s premier Old-Skool & Kustom Kulture Festival.

Featuring a lineup of amazingly pimped out rides from Japan, America, Australia as well as good ol’ Buatan Malaysia monstrosities at literally every turn, the event at its core aims to help inspire and shed some light on the Malaysian custom motoring scene.

It was surely a weekend full of extravagant happening, but here are some of our favorite highlights from the show;

The reveal made by the company’s global lead designer Steve Vandervate was also graced with the presentation of two life-sized versions of the Nissan Skyline R31 and Honda City Turbo II models.

The Japan Historics line of cars is scheduled to be out sometime in 2020!

A testosterone-fueled parade where featured custom cars and bikes march into the event hall in quite spectacular fashion to the gawking eyes and cheering of a petrol-high audience.

A custom car contest sponsored by Petronas where seven local â€œworkshopsâ€ showcase their stunningly build cars for a chance to win cash prizes and, most of all, mad-respects!

The contest featured entries from well-respected names in the custom culture scene, like Classic Garage from Johor Bahru, WakSam Garage and RebanBlackbird from Subang, and Carazee Artwork from Klang with their totally CRAZEE 1972 Volkswagen Nova Sterling.

A groovy specially customized, surf-themed Volkswagen Beetle there to be given away for a special lucky draw by Hausboom, in collaboration with Hot Wheels.

Where parents can drop off their kids to learn some awesome skateboard moves.

A crossbreed Mini Cooper outfitted with a hyperbike (yes bike as in motor-bike…) engine from a Suzuki Hayabusa onto its rusty looking body, also given away as a special lucky draw prize!

And a whole lot of jaw-dropping custom vehicles from local and international talents that would either satisfy or fuel your gasoline-induced desires, like;

Or if you fancy two wheels, check out the pair of BMW R9T Custom and the 1948 FL Harley-Davidson Custom â€œStG Nautilusâ€ made by Heiwa Motorcycle and Hot Dock Custom Cycles.

Even bicycles can’t escape the creative grasp of the kustom culture scene!

With a whole lot of other activities including talk shows, art galleries, a Vintage themed flea market, awesome food and live performances from local bands to keep the crowd revved up, the Art of Speed Autoshow is definitely one experience worth pulling into.