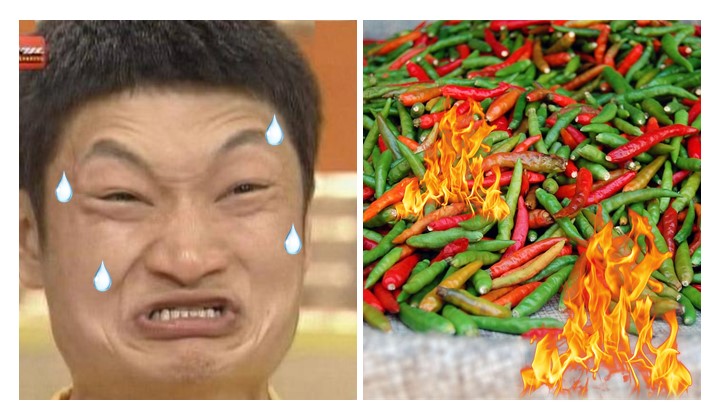 But we’ve seen a huge change in how the spicy foods are meant to be eaten: they are now a challenge. From spicy Mamee Monster packets to the latest McDonald’s Extra Spicy Ayam Goreng, these spicy foods are all about how much heat you can physically handle. (And then… bragging to your friends, I guess?)

A large percentage of Malaysians are now gleefully making spicy food an exciting dinner plan that should be absolutely followed up with bubble tea. (Mala hot pot, anyone?)

But the question remains: WHY?

Why do these people willingly set their tongues on fire, sweat profusely, cry a lot, and suffer a final time on the loo? Are they masochists? Do they like the pain and find macabre joy in endless suffering?

It turns out that yes, your brain loves this abusive relationship. (Stockholm syndrome, anyone?)

The simplified science behind it is this:

What gives spicy food its heat is a type of compound called capsaicin. Capsaicin gives you a burning sensation and is not actually a taste, which is why some spicy foods can be extremely spicy but taste super bland .

When the capsaicin interacts with special proteins called TRPV1 on our tongues (or anywhere else on the body), it triggers the pain receptors on the nerve cells.

The brain panics, releases a bunch of endorphins (a natural painkiller) and dopamine (the “happy” hormone), and we end up in a chili-induced satisfied food coma.

It turns out that men and women eat spicy food for different reasons as well.

Men tended to take spicy challenges for the attention and to prove his status as “superior” for being able to handle his heat.

Women, on the other hand, like spicy food for the kick that it provides, and are less concerned about showing off their spicyness tolerance.

However, you would be pleased to know that you can’t physically get addicted to capsaicin. Unlike true addictions where you become physically dependent on the substance, spicy food just… makes you feel good.

So how can some people put entire cili padis in their mouths for fun while others lose all bodily function after a bit of Kimball’s sos cili?

Since the perception of spicy heat depends on the amount of TRPV1 proteins, some people can just beborn with more or less of it. This variation is one of the possible reasons why two people can eat the same thing and feel very differently.

Many people have noticed (especially for those who studied abroad in ‘white’ countries) that after a while of not eating spicy food, you lose your tolerance for it.

Our body is really good at adjusting itself to our lifestyle, so it’s true that when you eat spicy food very often, you do develop a tolerance for it (and will need more spiciness for the same kick!)

Or the candid truth is just that you like the burn, plain and simple. Whereas most people will immediately spit it out, you find unending happiness in putting the spiciest thing you can find in your mouth.

Is it because you’re miserable and the fiery sensation is the only time you can feel something in your emo soul? Well, there’s only one way to find out… Time to jio your friends to the spiciest place you know.