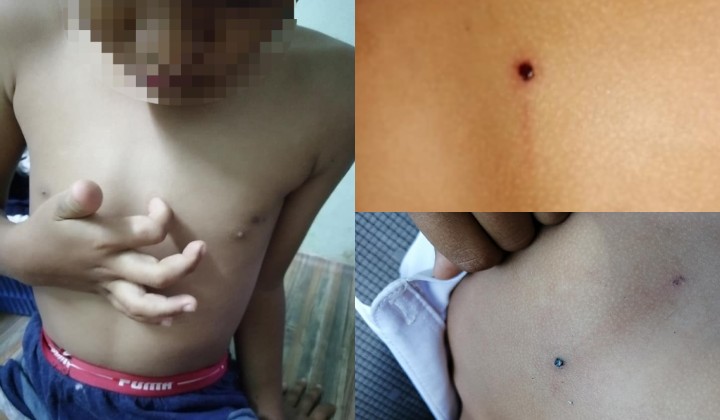 A distraught mother took to social media expressing her grievances over her son who had been stabbed in the chest with a pencil by a classmate at school.

Taking to Facebook to share her grief, user Mell Koleksi Balqis tells the concerning story of how her child had been the victim of repeated bullying.

In a series of postings, the mother claims that her son, who recently transferred to a new school, had been harassed by several other kids.

Supposedly, the bullies have not only been picking and teasing on the boy but also went as far as beating him up and stealing his lunch money.

The bullying reached its peak after her son was supposedly stabbed twice in the chest with a pencil by one of the delinquent bullies at the school.

Whats’s even more troubling, are the allegations coming from the mother, stating that the school and it’s teachers nearly dismissed the incident as “boys being boys”, seeing the case as nothing more than naughty kids joking around.

“When I got there, I saw my son crying in pain with his shirt unbuttoned… and there was another boy sitting at the other end of the room, who I knew very well, I’ve met and talked with him before…”

“The teacher had asked the boys what had happened, and said that they were merely joking around…”

“ I was furious. No this wasn’t a simple joke!”

“My son told me that the other boy had gotten angry at him for submitting his homework to the teacher when the boy had told him not to. But my son did it anyway because he was afraid that his teacher would get mad…”

“It was then that the boy stabbed my son, first with a blunt pencil, then a second time with a sharper pencil, while saying that he was going to kill him while doing so…”

The incident apparently had left the boy traumatised and fearing to return to school.

News of the bullying quickly took social media by storm with netizens raining in to share their concerns and dissatisfaction over what had happened to the young boy.

“Your son is so strong for tolerating with the bullies. Hope you and your family would get over this thing soon.”

“I’m sorry, but if I were you I wouldn’t just keep quiet. First I’ll see the teachers and ask why didn’t they take any action, Next I’ll meet the kid’s parents. Then I’d make a police report to protect the boy from being bullied any longer.

“I think the boy who stabbed your son has an anger disorder. He needs to get treatment. I feel sorry for you and your son. Hope he recovers from the trauma soon. Seems like the school counsellor needs to analyse the kids.

“Cases like this happened in my time at school too. Poor kid, that must’ve hurt. Hope he gets well soon. It’s best to make a police report and settle this rationally with the school. The bully stabbed him twice, meaning he had intended on hurting the boy.

“Reading this makes me so angry. If it was my child I would go berserk. The bully would get it from me for sure. Didn’t his parents teach him manners? What would happen when he gets older? He’d be a gangster in secondary school for sure…”

Thankfully, according to the mother, her son had been given the all-clear by the doctors and is currently recovering at home.

The mother added that the culprit’s family had even come out to apologize in regards to the incident.

She hopes that by sharing her story it would serve as a valuable lesson to parents to be aware of their child’s sudden changes in behaviours, emotions and actions as this might be signs of an underlying problem that adults might not be aware of.