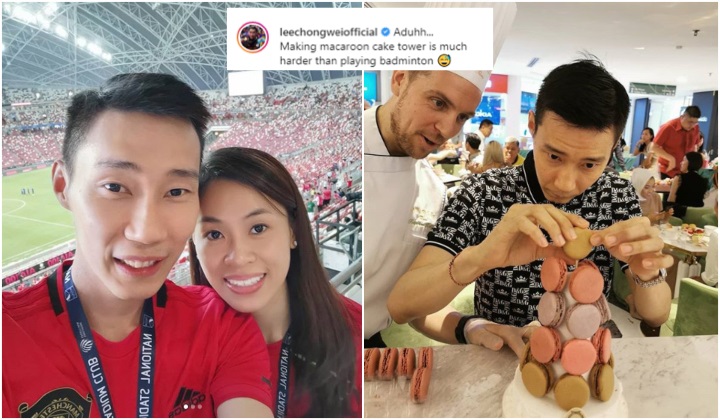 We bet you didnâ€™t realise itâ€™s been about a month since Datuk Lee Chong Weiâ€™s retirement, right?

So, how exactly has Lee Chong Weiâ€™s life changed since he put down his professional badminton racket?

Spends most his time with his wife and the kids.

Instead of spending hours practicing on the badminton court, Lee Chong Wei said he now spends most of his time with his wife and kids.

According to him, he still picks up the badminton racket every now and then, but only to play with his sons rather than with the intention of practicing to win his next match.

On June 15, Lee Chong Wei was appointed by the Olympic Council of Malaysia (OCM) as Malaysiaâ€™s Chef-de-Mission (CDM) for the Tokyo Olympics 2020

The appointment has been keeping the former national badminton player busy.

“What am I up to these days anyway?”

â€œNext month, I will be attending meetings in Japan. This is what my schedule looks like post-retirement.

In September and October, I will be organising a sparring session for the youth and making internal arrangements for the 2020 Olympics.â€

As CDM, Lee Chong Wei will represent the Malaysian team at the Olympic Games in Tokyo, Japan next year.

The appointment requires Chong Wei to adjust from being a national athlete to the head of the national contingent within a short time frame.

â€œI work in a completely different way now. Previously, my tasks were as an athlete, now I have become an officer.

Instead of only focusing on updates on badminton, I now have to follow the news reports on all types of sports like diving and archery.

Iâ€™ve been learning a lot from other officers such as Datuk Seri Mohamad Norza Zakaria (Olympic Council of Malaysia President) on how to change from being just a sportsman.â€

Although he is enjoying his time as a retiree, Lee Chong Wei admits that he does miss the sport that has been his companion for 19 years.

â€œI miss getting on the court and holding a racket. Now the only time I hold a racket is when I play badminton with my kids.â€

We miss you on the courts too Chong Wei! But we’re glad you’re enjoying retirement, either way!