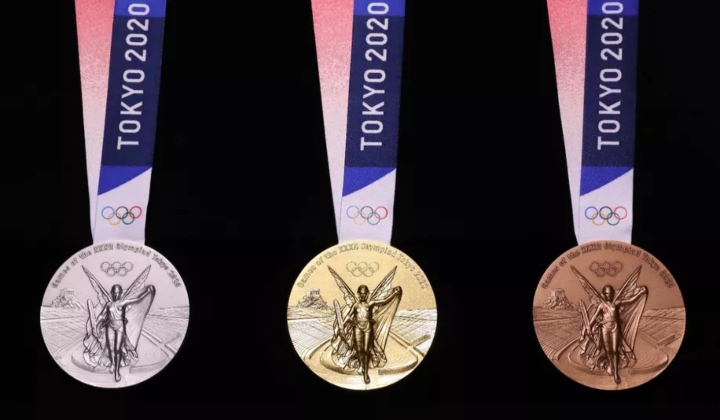 With exactly one year to go until the Olympic Games, the Tokyo 2020 organising committee has unveiled the medals that will soon adorn the champions of the Tokyo 2020 Olympics.

Made from recycled metals collected from 6.21 million electronic devices, the medals feature Greek goddess Nike standing at the Panathinaiko Stadium and the Olympics symbol.

According to Greek mythology, Nike was the goddess of victory. She was the daughter of the Titan Pallas and the goddess Styx. She and her three siblings, Kratos (power), Bia (force) and Zelus (zeal), were companions of Zeus. Holding the role of the divine charioteer, Nike flew above battlefields and gave glory to those who were victorious.

The unveiling of the medals was the main event during an extravagant ceremony in Tokyo to commemorate the countdown until the Games.

And again, in case you missed it the first time; true to Japanese culture, the medals were fully made from recycled materials.

The Tokyo 2020 organising committee achieved this by launching an extensive two-year campaign in April 2017 to collect donated electronic devices from the Japanese people to harvest necessary metals required to create the medals.