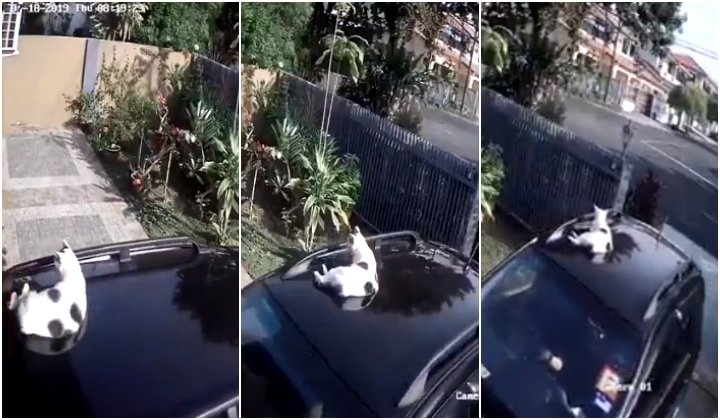 We donâ€™t know about you but weâ€™ve accidentally left water bottles, thermoses, wallets, keys, and stacks of paper on our car roof, and driven away completely unaware.

However, the one thing we have never accidentally left on our car roof though, is our pet cat.

@senoreeta_, shared CCTV footage of the front of her house showing her slowly backing her car out of her home with her cat chilling on top of her car roof.

According to her tweet, she was completely unaware that her cat was fast asleep on her car.

Senoreeta only realised her cat was stuck on top of her car when she stopped at a traffic light and noticed people were honking at her and pointing to her car roof. That was when she noticed a meowing sound coming from above her head.

And it looks like the cat also didnâ€™t quite realise what was happening until senoreetaâ€™s car had completely reversed out of her house compound.

By the time the cat realised that he was a stowaway passenger, it was too late for him to hop off.

Explaining what happened, senoreeta said that her cat usually sleeps on top of her motherâ€™s car. It also tends to hop off when they start the car engine.

Her cat mustâ€™ve been really sleepy and groggy to not realise what was happening. Senoreeta suggests that he mightâ€™ve had a really late night.

Usually, he sleeps on the car but on my momâ€™s car. Every time we start the car, my cat would instantly wakes up and jump down. But i dont know what happen to him this morning 😂 TOO SLEEPY? HANGOVER MAYBE? pic.twitter.com/qOB12CVyUa

Bet your cat is the chillest 😂

FYI, cats like sleeping underneath cars and between car tires for safety and shade during a hot day because it enables them to see what’s going on around them without being seen.

Similarly, cats sometimes sleep on car roofs to nap in the sunshine without fear of people being able to reach them.

So, moral of the story: check both below, and on top of your car for cats before starting your journey!