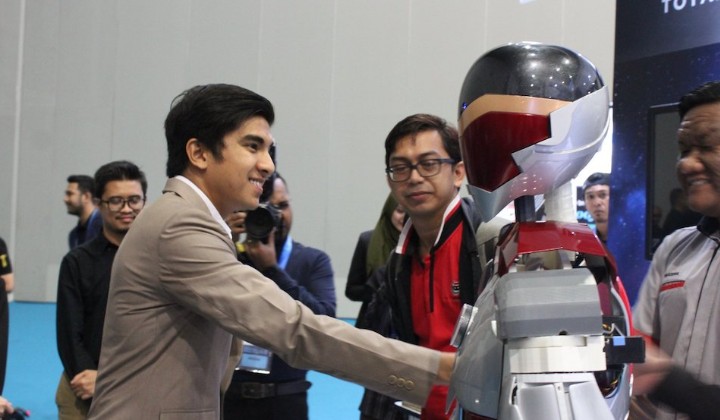 So if you didn’t know already, recently Sophia, the humanoid robot had a chance to mingle with Prime Minister Tun Dr Mahathir Mohamad the Beyond Paradigm Summit.

Little did we know that Malaysia too has its own advanced artificial intelligence (AI) humanoid robot!

The Advanced Development Autonomous Machine or ADAM for short is said to be the nationâ€™s first-ever android!

The Daft Punk-looking robot which comes equipped with a space-age head visor for a face, standing at about 5 feet tall and weighing some 40 kilograms, was brought to life just this March 2019.

Developed by a local robotics company Robopreneur Sdn Bhd, ADAM is capable of communicating and interacting with humans by way of voice detection and recognition enabled by its high-tech AI brain.

The automaton is capable of a range of upper body movement and mobility and can even move its fingers.

Robot Does, Well, Not The Robot GIF from Robot GIFs

ADAM was developed as part of a five-year project as a contributing initiative to the country’s IR4.0 vision – Industry 4.0 is part of Malaysiaâ€™s fourth industrial revolution plan to bring the country into the modern age through technological advancements.

The machineâ€™s development is part of a three-step plan to create a fully functioning and multi-capable humanoid robot akin to Sophia.

Heâ€™s still in phase one for nowâ€¦

The second phase would be focused solely on developing and completing his robot body.

But soon, in his third phase, ADAMâ€™s development will include him with more advanced quirks like machine learning algorithms so that he could interact more naturally with human beings with features such as visual recognition and even some emotional intelligence.

ADAMâ€™s creators even envisioned the robot having a distinctive â€œMalaysian faceâ€, turning it into an iconic symbol of Malaysiaâ€™s push towards the future.

The company also has plans to mass-produce ADAM, possibly making it available in multiple fields and industries across the country and perhaps the world.

Who knows, maybe soon we would get to see a bunch of walking, talking ADAMsâ€™ about in the streets of KL.