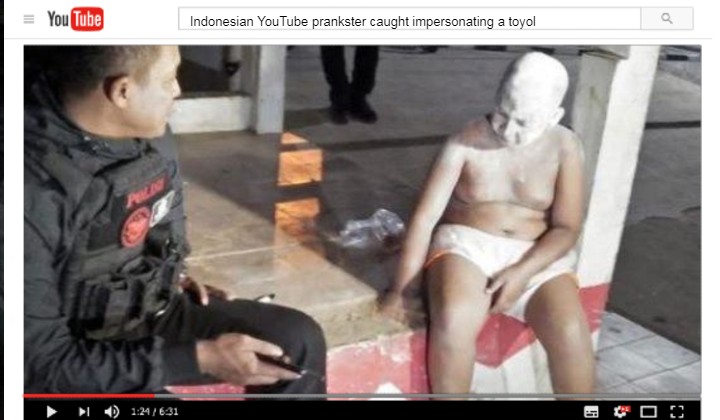 Boys will be boys, or so the saying goes…

Just last week, the world was left giggling by the actions of a lone five-year-old Indonesian boy who climbed a rooftop to escape the clutches of manhood.

The kid stayed up there for about two hours trying to avoid being circumcised.

Today, more news of youthful male mischief broke the social sphere after a 13-year-old teen was detained for pranking people in Jakarta dressed up as a toyol.

The boy identified only by the letter ‘A’ was detained by the Depok Police’s Jaguar Team, a special unit tasked with combating street crimes in West Java at around 2am last weekend.

The teenage boy, as seen in the picture, was caught completely shirtless and covered in white powder substance from head to toe to complete his paranormal look.

Apparently, the boy together with several other of his friends was on a mission to achieve viral fame by recording their mischief for YouTube.

The best part is, in the true spirit of brotherly friendship, just as soon as police showed up on the scene, the group of young content creators quickly dispersed into the shadows, leaving A, the star of the show, to face the music all by his lonesome.

Though we were unable to find any footage of their attempts at viral glory, these boys surely managed to make a name out of themselves with their ridiculous antics.

According to reports, A was released right afterwards but not before receiving a proper scolding from officers at the scene.

Let’s see what more Indonesia has in store for us this week :p