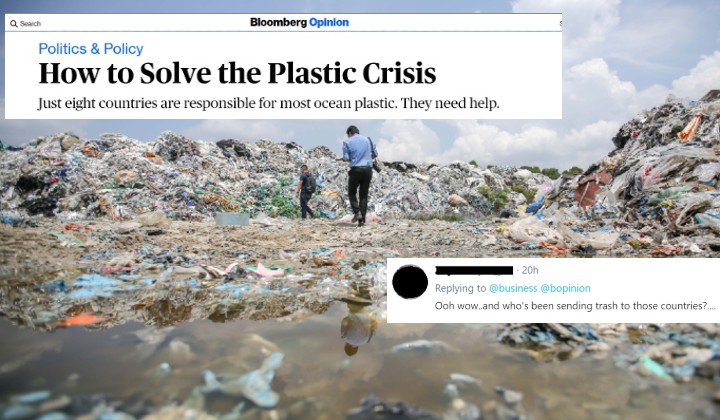 For the last couple of months, Southeast Asian countries have been standing up to the bigger nations of the West.

Malaysia, Philippines and Indonesia have sent back tonnes of trash, disguised as recycling materials, to the US, UK, Australia and Canada.

It looked like the world was finally waking up to the realities of plastic waste and pollution.

Then, Bloomberg â€“ a US-based media company- tweeted an article titled â€˜How to Solve the Plastic Crisisâ€™, accompanied by a caption that names Malaysia as one of the top contributors for 63.6% of ocean trash.

These eight countries are responsible for 63.6% of ocean trash:

The opinion piece by Adam Minter, whoâ€™s spent two decades covering the global recycling industry, states that just 8 countries in Asia are responsible for around 63% of total plastic waste flowing into the oceans.

He also states that the junk is â€œalmost solely generated by Asia’s newly minted consumer classesâ€.

Then, he offers a solution of improving trash collection, citing a study by the McKinsey Centre for Business and Environment that states boosting trash collection rates to 80% in just 5 Asian countries â€” China, Indonesia, the Philippines, Thailand and Vietnam â€” could reduce ocean plastic waste by 23% over a decade.

The article did NOT sit well with the internet.

The original tweet by Bloomberg was inundated with a flurry of responses that highlight waste dumping by Western nations in Southeast Asia.

Funny coincidence: these eight countries are where the US and Europe send their trash. https://t.co/BpUT0hg8qz

https://t.co/D6lKhpUpGt you know the truth will come out.

Headline a little misleading. Western countries export most of their plastic to said countries.

Let’s be honest in who’s rubbish it actually is!

However, there were also replies that attempted to clarify
the article, saying that the main message of the article was to highlight how
the lack of proper waste management leads to trash flow from land into the ocean.

The trash going into the ocean from China, India, Indonesia etc. is not trash imported for recycling. It’s trash from domestic consumption that goes into the ocean because of lack of waste management.

The waste import issue you raise is a problem but a separate one.

The basis of Adamâ€™s article seems to be a 2015 report by scientists that estimated how much land-based mismanaged plastic waste was entering the ocean.

Have a look at the article (HERE) and science report (HERE) and let us know what you think on our Facebook & Twitter accounts.