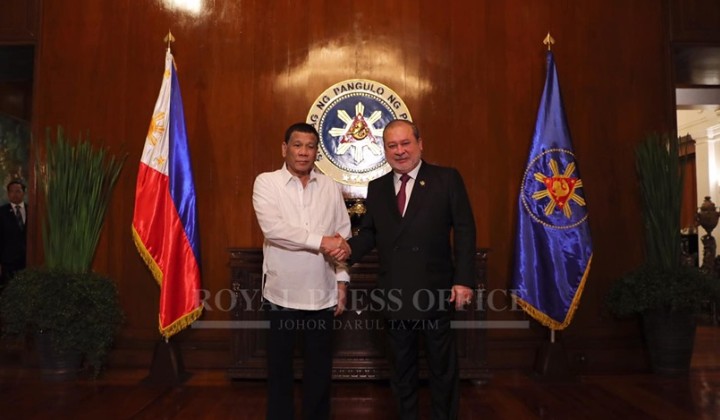 The royal ruler of Johor Sultan Ibrahim Sultan Iskandar had yesterday awarded Phillippine President Rodrigo Duterte with the honorable title of Datuk following his visit to the island republic.

The title Datuk or Datoâ€™ refers to a traditional Malay honorific title customarily used and given in Malaysia, Indonesia, and Brunei (not to be confused with yallâ€™s own datuks or grandfathersâ€¦).

The Filipino leader was conferred with the Darjah Sultan Ibrahim Johor Yang Amat Disanjungi Pangkat Pertama Datoâ€™ Sri Mulia Sultan Ibrahim Johor (SMIJ) – which carries the official title of â€˜Grand Kightâ€™ – the highest of three coronations bestowed by the Johor Sultanate – during a ceremony at the Malacanang Palace in Manila.

The premier now joins the likes of the many Datuks in Malaysia including a few honorable mentions like Datuk Jackie Chan and Datuk Shah Rukh Khan.

In return, the Johor Sultan was conferred with the Order of Sikatuna – a diplomatic merit awarded to those who have contributed towards fostering and strengthening ties with the republic nation of Philipines – which carries the title Datu (basically the Malaysian equivalent of a Datuk-ship…), by the republicâ€™s leader

Duterte has been at the center of international scrutiny due to his controversial â€˜war on drugsâ€™ campaign, which according to one report placed the nation as the fourth most dangerous place in the world.

Data from the Armed Conflict Location and Event Data Project (ACLED) had noted that the countryâ€™s ruthless anti-narcotics crusade had resulted in 1.3 million asset seizures, 185,401 arrests and 5,425 drug suspects killed from July 2016 to April 2019.

The international watchdog, Amnesty International had even labeled Duterteâ€™s harsh policies as a serious violation against human rights and is calling for intervention by the UN to find a resolution in order to address the claimed atrocities committed by the Philippine government.