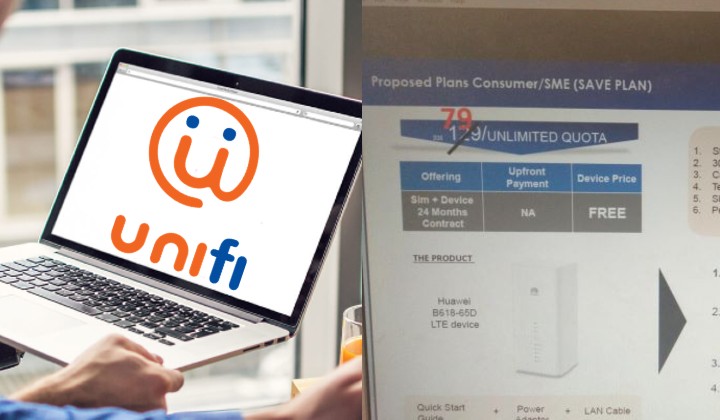 Head’s up people, cuz rumor has it that Telekom Malaysia (TM) might be coming up with a new internet solution for its customers.

Calling it the Unifi Air, the internet plan is set to provide high-speed wireless broadband connection through the mobile 4G LTE network.

This revelation was brought to light when images of the proposed internet service were apparently leaked online.

According to the available details, it appears that the broadband device is set to work via the use of a Huawei B618-65D LTE device which operates on the 2.3MHz band frequency.

Claiming that the system can manage up to 64 connected devices at any given time, the plan supposedly provides for unlimited internet quota at a discounted starting price of RM79.

By comparison, current TM internet Wireless Broadband Plan provides only 60GB of data at RM79 per month on top of the RM565 wireless router that you’d need to connect to it.

Supposedly, the new Unifi Air would come with a 24-month contract and no upfront fees.

Its proposed plug-and-play design is also set to have users instantly connect online without the need for a technician to install the system.

It’s speculated that this new high-speed broadband solution was proposed as an answer to TM’s longstanding infrastructure limitations, allowing for high-speed connectivity to be available to everyone at an affordable price.

We Can All Get Free 1GB Data Daily Starting 1 April

Do E-Commerce Sites Like Lazada Prove The Power Of The Internet During The Movement Control Order Period?