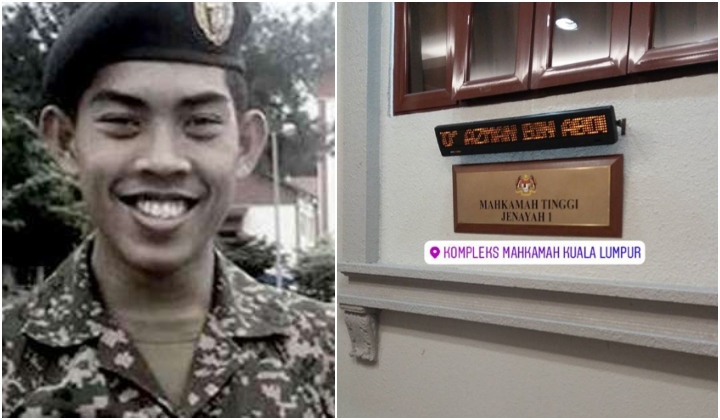 National Defence University of Malaysia (UPNM) cadet, Zulfarhan Osman Zulkarnain died at the Serdang Hospital on June 1, 2017. It is believed that he was abused by several other UPNM cadets after being accused of stealing a laptop.

The High Court has set July 31 to decide on the fate of 19 UPNM cadets who have been charged with injuring and murdering him.

Yesterday (July 8), the court heard the final submissions from both sides of the case and Twitterjaya has since been trending #Justice4Zulfarhan in support of the cadet, with many hoping that justice will be served.

“Their case will be finalised on July 31”

Throughout the proceedings, Zulfarhanâ€™s younger brother, Zulhilmi, has been updating details of the case on his Instagram stories, including some inside information not available in media reports.

In cases such as these, the onus is on the prosecution to prove guilt of the defence beyond a reasonable doubt.

Hereâ€™s a summary of the court proceedings from Zulhilmiâ€™s Instagram.

The first hearing was held on January 28, 2018. There are six main suspects charged with the murder and injuring Zulfarhan, and all six were present on every single day of the trial.

Around 20 witnesses were called to give their testimony throughout the proceedings, including police officers, medical assistants, doctors, nurses, pharmacists, forensic experts, staff and students from UPNM and Zulfarhanâ€™s own father who had to identify his body after he passed away.

“The accused with their respective lawyers. Yesterday, I couldn’t stop watching them. I felt like punching them. But then realised even if I punched them, that wouldn’t change anything…right?”

A doctor from a private clinic testified that the accused had brought Zulfarhan to him for treatment. He said that he was told by the accused that Zulfarhan was injured by an explosion that happened during their cadet training.

Meanwhile, one of the forensic experts who testified told the court that it was impossible for Zulfarhan to have self-inflicted his injuries as there were scalding marks all over his body, including on his back – an area where he could not have reached.

Despite the doctor’s orders for Zulfarhan to go to the hospital for treatment, he never went and the accused never took him. Instead, they took medication from the doctor at the clinic and treated his wounds themselves.

On the evening of 31 May, Zulfarhan broke his fast with several of the accused at a rented apartment where they had brought him to hide him while he recovered from his injuries.

After he ate, he asked the accused for his medication and retired to rest. It was shortly after this that the accused noticed Zulfarhan had become unconscious.

The accused attempted to revive him via performing CPR. When that didn’t work, they called the ambulance.

The forensic expert who performed Zulfarhan’s post mortem testified that it is possible that he could have died due to several factors. Besides his injuries, the expert admits that it is also possible that Zulfarhan may have been allergic to the antibiotics given to him to treat his burns.

Therefore, the expert believes Zulfarhan’s cause of death to be a combination of hypervolemia, heart failure, and kidney failure.

An officer at UPNM was tipped off about the torture that was inflicted upon Zulfarhan. Captain Haryani testified in court that she received an anonymous poison-pen letter encouraging her to raid one of the rooms at the university.

Captain Haryani admitted that she contacted the students staying in the room and asked them to come and see her. She also informed the warden of the tip off and requested that he check the room. However, by the time the warden checked the room, Zulfarhan had been moved to the rented apartment by the accused to avoid detection.

Zulfarhan’s roommate and close friend, Aiman Auf, was aware of the torture inflicted upon Zulfarhan. However, he was afraid to come forward and report the bullying in case he too befell the same fate as Zulfarhan.

Aiman admitted that he did not know Zulfarhan’s injuries were fatal. However, he had written two anonymous poison-pen letters to UPNM to tip them off about what had happened as he was worried about his friend.

Based on the testimony by witnesses, Zulfarhan was punched and kicked by the six accused. He was also hit using hangers and a broom. However, the worst of his injuries was from a steam iron. When Zulfarhan died, he had 90 burn marks all over his body.

The steam iron that was brought in as evidence is wrapped in paper at the end to protect evidence of skin and blood belonging to Zulfarhan that has stuck to the iron when it was placed on his skin.

The six accused are facing murder charges under Section 302 of the Penal Code, an offence which carries a mandatory death sentence upon conviction.

High Court Judge Datuk Azman Abdullah fixed July 31 for a decision on whether the accused need to enter their defence.

Meanwhile, the six above, together with 13 other UPNM students have all
pleaded not guilty to voluntarily causing grievous hurt to Zulfarhan with the intention of extracting a confession from the victim for allegedly stealing a laptop.

You can read the rest of Zulhilmi’s posts via his Instagram. Our hearts go out to the friends and family of Zulfarhan throughout this difficult time.