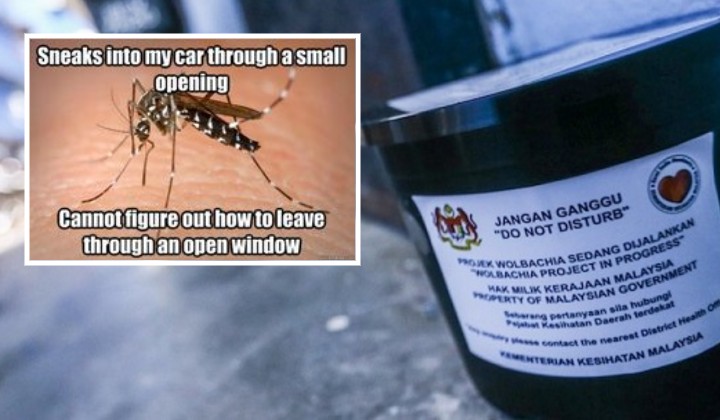 Back in 2017, the Health Ministry conducted a pilot project involving Wolbachia-infected mosquitoes being released in 8 areas in Selangor.

Those areas then saw a downward trend up to 80% of dengue cases.

Following this, Malaysia plans to use bio-control strategy to control Aedes mosquitoes.

The ministry also plans to reduce the reliance on insecticides. As fogging has untowardly side effects on humans like itchiness and nasal congestion.

Whereas releasing Wolbachia-infected mosquitoes do not harm humans.

Basically, they are Aedes mosquitoes that are infected with Wolbachia infection and are not genetically modified insects.

Instead, Wolbachia is a type of natural infection that is present in more than 60% of insects.

Besides, they look exactly the same as non-Wolbachia mosquitoes.

How do they do it?

Aedes mosquitoes that are infected with Wolbachia will not be able to carry Dengue, Zika or Chikugunya.

Instead, they only carry a bacteria that is harmless to humans and also to nature.

How safe is safe?

The World Mosquito Program had conducted two independent risk assessments, that achieved an overall risk rating of ‘negligible’ (the lowest possible rating) when mosquitoes with Wolbachia were used.

Hence, the method is known to be natural and is self-sustaining.

This is because it does not suppress the mosquito population, instead, it just suppresses the dengue virus in mosquitoes.

Currently, the Malaysian government is releasing containers of Aedes mosquito eggs infected with the bacteria.

Wolbachia-infected mosquitoes are produced when an infected female mates. Regardless of the male being infected or not.

However, if an infected male mates with an uninfected female, the eggs laid will not hatch.

This overall will produce mosquitoes free of dengue.

What are the future plans?

The Health Ministry plans to release more Wolbachia-infected mosquitoes throughout Malaysia by September.

Where the next stage would be releasing hatched insects instead of just containers of infected eggs.

Malaysia would be the second country to be using this technology after Australia, says Health Minister Dr. Dzulkefly Ahmad.

Driven to Extinction: The Tragedy of Malaysia’s Sumatran Rhino